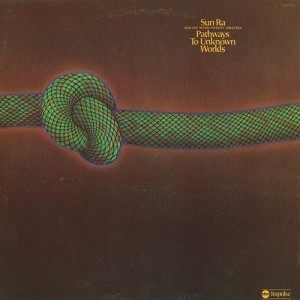 Just three tracks on this album, but the opener “Pathways to Unknown Worlds” and the closer “Cosmo-Media” are great ones.  My friend Patrick says there isn’t another album in the Sun Ra catalog quite like this.  It has some of the sparse, fluttering free soloing popular with European free jazz (AKA free improv) players, which Sun Ra had already featured on The Heliocentric Worlds of Sun Ra, Volume 2, and even the two Nuits de la Fondation Maeght albums.  But especially from about three-quarters into the title track, and throughout “Cosmo-Media,” there are also more electronics, which makes this more like some of the primarily solo keyboard excursions on The Solar-Myth Approach, Vol. 1, even Atlantis and bits of Space Is the Place.  Ra was incorporating early synthesizer sounds into a small combo setting, which he would do a lot more of later in years to come (Disco 3000, Media Dreams, Oblique Parallax).  The freely improvised soloing found here would not be as relentless in the later years, instead used a bit more sparingly as a change of pace.  Still, nothing in the Sun Ra catalog has such abstract soloing while still managing to be a part of music that is mellow and calm — to a point.  If that isn’t clear, what I mean to say is that this mostly isn’t played like a continuous wall of noise.  There is a lot of space between the notes and some separation between individual performances, but also some semblance of a futuristic sonic fabric at the same time.  Bassist Ronnie Boykins plays boldly and he’s a big feature throughout.  Rarely is an acoustic bassist so prominent on a Ra album.  This one seems like it looks back and ahead at the same time, to things few people paid attention to at any point before, during, or since!  The quality of the solos and the openness of the soling will please Ra fans, though newcomers (at least those not keyed into free jazz) may wish to start elsewhere.  A reissue of the original Pathways to Unknown Worlds adds a bonus track from the original session that was on defective magnetic tape, restored with the aid of modern technology, plus an entire rejected, previously unreleased album tentatively entitled Friendly Love that is a bit less challenging in the solos and coupled with a more persistent base of percussion (yet is still quite nice).