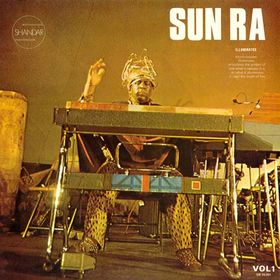 Europe has a very different culture than the United States.  European countries like France have retained something from old aristocratic traditions, whereas the Unites States adheres to a “pull yourself up by your bootstraps” myth that fosters selfishness and smugness set against a colder business-oriented mindset.  After the May 1968 uprising, opposition to the new had also retreated in France, becoming more permissive.  So it was in Europe (St. Paul de Vence, France), not the New World, that a wealthy benefactor from the art world bankrolled a festival entitled “Nuits de la Fondation Maeght” featuring new jazz and modern composition.  Sun Ra made the trip, and that was something of a major breakthrough because his Arkestra did not yet have a worldwide following, or even much of a domestic one!

Nuits de la Fondation Maeght, Vol 1 ranks among the best of the group’s live recordings.  Though there are a few very nice shorter pieces with vocals (“Enlightenment,” “The Stargazers”), this is mostly given over to long-form free improvisations.  “The Cosmic Explorer” is mostly a solo feature for Sun Ra on various then-new keyboards.  His efforts make even the excursions on the solo half of My Brother the Wind Vol.2 sound tame.  A great extended sax solo on “Shadow World” also helps place this on the more aggressive and challenging end of Sun Ra’s musical continuum.  In all, a wonderful set, especially for the converted, and a compelling reminder of how this group of musicians managed to make music that, in its varied totality, was fundamentally different than what anyone else has done before or since.