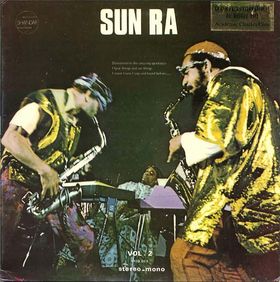 VOL 2 is a great extension of the first Nuits de la Fondation Maeght disc.  Although similar in ways, particularly across the more “out there” second side, this second volume also moves into other areas.  There is space for quieter sounds, as with Alan Silva’s bass solo on “Friendly Galaxy Number Two.”  “Spontaneous Simplicity” also delivers some richly harmonic horn charts, and then moves on to the sort of modernized, pan-African ethno-grooves that would become a mainstay of the Arkestra’s 1970s period.  This is almost as good as the first volume, though middle of side two can’t consistently match the focused intensity of the other disc.  Start with VOL 1, and if you like it plan a stop here as well.