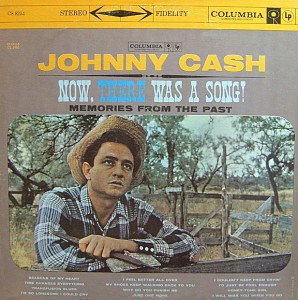 When Cash moved to Columbia Records, his first few albums continued where he had left off at Sun Records.  There was a mixture of teen-idol material, now having more elaborate production, with gospel and folk.  These early Columbia albums were produced by Don Law.  Now, There Was a Song! featured the addition of producer Frank Jones.  Law and Jones would continue to work with Cash for most of the decade.  Together, the three created a series of concept albums — though the “concept” is more stylistic than thematic here.

Most of Cash’s music revolves around his trademark boom-chicka-boom rhythm and relatively simple instrumentation, with rock ‘n roll influences that separate it from most commercial country music.  Now, There Was a Song! paired Cash and The Tennessee Two with a fiddle, pedal steel guitar, and piano, with more conventional honky tonk settings and rhythms.  The thing is, it works!  The covers are perfectly selected — even if “Cocaine Blues” is forced to appear as the censored version “Transfusion Blues”.  Cash sounds like he loves these songs and is thrilled to be performing them.  He was on top of the world at this point in his career.  He was enjoying plenty of success, and drugs and the grind of touring had yet to take their tolls on him.  Sure, this one clocks in at barely over 26 minutes, but it’s nice to have nothing but great tunes rather than a set bogged down by a lot of inferior filler.  This is one of the man’s most consistently good albums, even if paradoxically it’s probably least representative of his trademark sound and somewhat like a lot of other country recordings of the 40s and 50s.