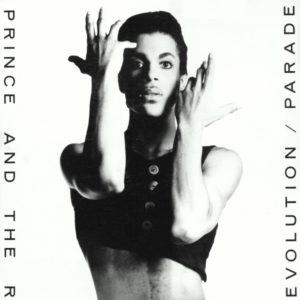 Lots of excellent commentary has already been written about Parade, the soundtrack to a second film starring Prince, Under the Cherry Moon.  The film is terrible in case you are wondering.  The soundtrack came along after Prince’s big breakthrough with Purple Rain.  He followed that big success with the cathartic (in a self-indulgent way) neo-psychedelic meanderings of Around the World in a Day.  Parade was a more concerted effort.  And Prince goes big most of the time, with grandiose production concepts mixing together contributions from large sets of musicians.  Yet, as my friend Patrick said, “it’s at once too much and not enough.”  He piles on the production gimmicks just because he can, and well into the album those efforts hardly ever seem to come to fruition.  Side one is all over the place, dragged down by the incongruous marriage of lightweight compositions and jarring recording experiments.  It doesn’t offer much except for “Girls & Boys,” and the somewhat mediocre “Under the Cherry Moon.”  But side two turns things around completely.  There is the big hit “Kiss,” which remains one of Prince’s best.  But “Kiss” is part of the great closing sequence of “Kiss” (an insanely infectious and tight dance funk jam), “Anotherloverholenyohead” (a loose yet funky workout) and “Sometimes It Snows in April” (a slow-burning epic ballad).  The second side is Prince in his prime and that more than makes up for the meanderings of the first.  And the great news is that Prince turned around and took all the best parts and added even more great songs and ideas for his next effort, the magnificent Sign ‘O the Times.