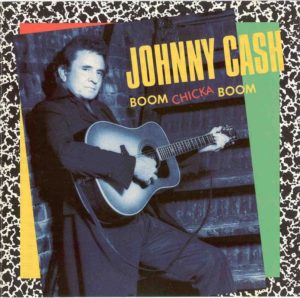 Continuing along the path of Classic Cash: Hall of Fame Series (a collection of re-recordings of old Cash favorites), Boom Chicka Boom goes back to the way Cash used to sound long ago rather than trying to update him.  “Farmer’s Almanac” is derivative of his last big hit “One Piece at a Time,” though most of the rest tries to sound like Cash of the 1950s and 60s.  But he’s going through the motions, and some real problems with his band become apparent.  Guitarist Luther Perkins was the man responsible for Cash’s iconic boom-chicka-boom sound.  But Perkins died in 1968 after being caught in a fire in his home.  The thing is, no replacement featured here has any of the charisma of Perkins.  In the passing years Cash often did best when Carl Perkins (no relation), Marty Stuart or session guitarists like Norman Blake were involved instead of a Luther Perkins imitator.  This one isn’t terrible but it’s boring, in large part due to the various Perkins imitators on guitar.