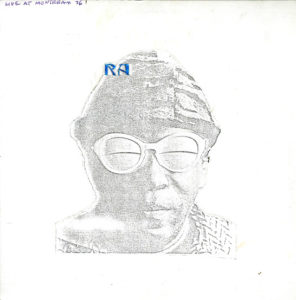 A pretty good live set.  This is one of the most high fidelity live recordings of the Arkestra pre-1980, and it features everything from Cecil Taylor-like piano pounding (“Of the Other Tomorrow”) to synthesizer freak-outs (“Gods of the Thunder Realm”) to afro-futurist space chants (“We Travel the Spaceways”) to big band sci-fi exotica (“Lights on a Satellite” and “El Is the Sound of Joy”) to a loose rendition of a standard (“Take the ‘A’ Train”) to plenty of songs with free soloing (“For the Sunrise,” “The House of Eternal Being” and “Prelude”).  It is somewhat interchangeable with a lot of other live Arkestra recordings of the era though.  Personally, because of the slightly showy, programmatic nature of these performances, I prefer the wild yet stately late 60s recording Pictures of Infinity, some of the more intense early 70s live discs like Nuits de la Fondation Maeght, Vol. 1, It’s After the End of the World: Live at the Donaueschingen and Berlin Festivals, the intimate late 70s sets like Disco 3000 and Media Dreams, the lively mid-80s live sets, Live in Nickelsdorf 1984 (and its counterpart Live at Praxis ’84), and even the coarse Egyptian sets like Live in Egypt 1 and the autumnal Live at the Hackney Empire.  If that seems like a lengthy list, then the point is made.  Live at Montreux is not bad at all, but faces stiff competition from so many other Sun Ra live recordings that it doesn’t merit any special attention.