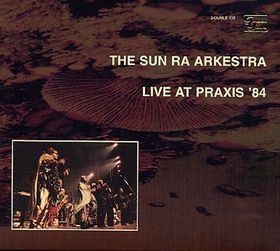 The Arkestra has more polished performances on record, as well as numerous live sets that were recorded better.  Yet this collection of the three original Praxis volumes that documented a show in Greece still offers a uniquely comprehensive view of the basic template for late period Sun Ra.  There were noticeably greater numbers of standards, something likely driven by a number of factors including heightened confidence from recent successes, Sun Ra’s advancing age (he was about to enter his seventies), and even overtures to changing commercial tastes (the Eighties being known for a “conservative” movement in jazz).  The band was frequently recreating Fletcher Henderson recordings like “Yeah, Man!” too.  These were not just performances of Henderson’s signature songs with their original arrangements, but actually live, note-for-note recitations of the old recordings in their entirety.  If you dig this, note that a concert from two weeks later is available on Live in Nickelsdorf 1984 that is at least as good (maybe better).