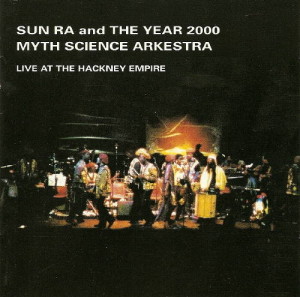 Live at the Hackney Empire was recorded in London just a few weeks before a series of strokes severely curtailed Sun Ra’s ability to perform.  That makes it the last great Sun Ra album.  The most challenging material is up front, with the bulk of the rest of the album focusing on back catalog favorites and standards (many of which, like “Prelude to a Kiss,” “Somewhere Over the Rainbow,” and “Yeah, Man!,” had become regular features in concerts).  There is overlap in the set list with other live recordings from the group’s late period (compare Live at Praxis ’84 and Cosmo Omnibus Imagiable Illusion: Live at Pit-Inn Tokyo, Japan, 8,8,1988).  But the length of this set, and the wonderfully warm and effortless performances still make it stand out.  A few guest appearances — Talvin Singh, India Cooke, Elson Dos Santos Nascimento — might also be of interest.  Although some late period records sound like they were made by a band ready for retirement, there is no indication of that here.  Certainly, this only occasionally reaches for the more abrasive sounds the band was known to utilize.  That is hardly a concern.  Even in the mellower moments the performers sound thrilled to be making music.  This might not be a bad place to get your feet wet with Sun Ra and his Arkestra, and longtime fans will probably find this stands in the top tier of the many seemingly similar live albums out there.  It is simply great music with nothing to prove.  If it is autumnal work, it manages to be that in the best possible way.