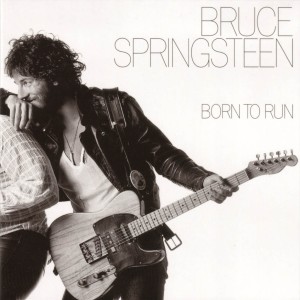 It is possible to look at Bruce Springsteen as the ultimate salesman/apologist for capitalism in the 1970s music scene.  Looking at Springsteen’s excellent, and overlooked, debut album Greetings From Asbury Park, N.J., one finds (much like in Van Morrison albums) a dreamy desire for a kind of utopian world outside the confirms of present reality, and much pondering of the obstacles to such dreams. But with Born to Run the ambitions have been narrowed (“focused,” if you must say so) to concentrate all energies on reaching escape velocity, that is to say, all attention is on the act of breaking free. The context of what is being broken away from, or what destination might await anyone who does break free, and other such concerns, are all relegated to a decidedly secondary place.

Historian Jefferson Cowie wrote a book called Stayin’ Alive: The 1970s and the Last Days of the Working Class (2010), which theorized that one of the dominant narratives in American media in the 1970s was that of the individual breaking free of restrictive social bonds.  Is there any more acute statement of that sentiment than the title track of Born to Run?  Ernest “Boom” Carter‘s drums mechanically urge everything onward:  thud, thud, thud, thud, thud, thud, thud, thud, thud, thud, thud, thud! Elsewhere the rhythm on the drums is steady but played in a circular figure.  (The monotonous rhythm of the drums set against the more supple, syncopated rhythms of the other instruments and vocals is one of the most significant features of the recording).  Bruce sings:

Baby, we were born to run”

A rebuttal of sorts might be the Carpenters‘ “I Need to Be in Love” from A Kind of Hush (1976), with the line, “But freedom only helps you say goodbye.”  In that Carpenters song, there is a resigned acceptance of stifling social bonds, without completely internalizing and normalizing the strains those social bonds produce.

Why does all this matter?  Well, there is a theory that politicians in the United States basically offer up constituencies to the highest bidder — they form constituencies in the name of certain interests but then almost always betray those people and interests by accepting money (bribes) in the form of campaign contributions to further the opposing goals of the donors.  This is more or less the “investment theory of politics” by political economist Thomas Ferguson (similar theories have been offered by the likes of G. William Domhoff, etc.).  Recent, well-publicized research by Martin Gilens and Benjamin Page empirically supported these theories, showing that the opinions of ordinary people have close to zero influence on public policy in the United States while those of elites (and their organizations) have substantial influence.

If we look at the Carpenters song as being built on a christian notion of love (as in, “love thy neighbor”), a kind of community-building myth that brings people together despite differences, Springsteen is pushing for an anti-christian attitude of atomistic individuals.  His constant references to automobiles is simultaneously praise for generic materialistic consumption, weird sexualized commodity fetishism, and advocacy for enjoyment of the primary mechanism for an individual to contribute to fossil fuel pollution and waste.  Now, it is possible to say that all this is sheer coincidence.  Or not.  Matthew Modine‘s character Pvt. Joker in the film Full Metal Jacket (1987) is the cynic who actually manages to sustain the Vietnam war effort by maintaining a protective personal distance from the insane logic of the war effort, whereas Vincent D’Onofrio‘s character Pvt. Pyle, who takes the war effort serious, shoots himself, thereby not advancing the effort.  Springsteen always had a sense of irony and cynicism, but it was the sort that worked in favor of the groundswell of neoliberal politics in the mid-1970s.

Neoliberalism, in terms of specific and recognizable policies, is about favoring financial interests over labor, privatization, fiscal austerity, deregulation, free trade, and reductions in government spending to expand the role of the private sector in the economy; but those policies are sustained by a manner of thinking that favors certain groups over others.  Henry A. Giroux: “As an ideology, it construes profit making as the essence of democracy, consuming as the only operable form of citizenship, and upholds the irrational belief that the market cannot only solve all problems but serve as a model for structuring all social relations. It is steeped in the language of self-help, individual responsibility and is purposely blind to inequalities in power, wealth and income and how they bear down on the fate of individuals and groups.”  Erik Olin Wright: “Neoliberal ideology says that the social-democratic solutions are permanently off the table. That’s just self-justification of elite privilege.”  Michael Hudson: neo-liberalism is neo-rentier and perhaps neo-feudal, and attempts a counter-enlightenment.

So, yes, perhaps Springsteen was a useful idiot, unknowingly advancing interests he didn’t consciously wish to advance.  All this does matter, because his public image is that of the “ordinary Joe,” or, perhaps, hero of the “ordinary Joe.”  But is he really helping ordinary people, or selling them out to their class enemies? It seems like the latter more than the former.  Further proof might be how so many people “misunderstand” Springsteen’s Born in the U.S.A.  Some intellectual types state that listeners who use the song for its patriotic content are missing its ironic, cynical critique of patriotism.  But perhaps the intellectuals are overstating the effect of irony/cynicism, and perhaps it really is just a necessary distance.  In this way, maybe Springsteen is akin to Dmitri Shostakovitch, whose very distance from Stalinism was paradoxically really part of the functioning of the Stalinist regime.  Like Pvt. Joker and Shostakovitch, Springsteen actually aided the Carter/Thatcher/Reagan neoliberal counter-revolution to roll back the social welfare programs of the mid-20th Century.  Oh, and also maybe a nickname like “The Boss” aligns Springsteen a bit too close for comfort with the exploiters of labor?

So both at the level of individual psychology, and at the level of the political economy, Springsteen’s music can be seen as supporting the very thing it purports to oppose. Let’s return again to the Carpenters.  “I Need to Be in Love” and albums like A Song for You (1972) are about building something, rather than breaking away from something.  Even a cursory view of the Carpenters’ music reveals a kind of frustration with the world it inhabits.  But, the thrust of the music is about saying working those problems is preferable to trying to cast aside everything and start anew like Springsteen proposes in song.  Rather than simply cast aside institutions that have their problems, the Carpenters made music about recognizing and addressing those problems.  Springsteen, on the other hand, just abandons the difficult tasks.  These seem like cop-outs framed around mitigating symptoms rather than redressing root causes.  This might be summed up by articulating the missing burden: “The difficult lesson . . . is thus that it is not enough to simply give voice to the underdogs the way they are: in order to enact actual emancipation, they have to be educated (by others and by themselves) into their freedom.”

There are, indeed, some really good songs here:  the title track and the opener “Thunder Road.” There is some decent material too: the hearty R&B of “Tenth Avenue Freeze-Out,” etc.  Most of the songs maintain the sense of movement, action, and almost inevitability and achievement.  Piano is used in places to make the music grandiose.  The jazzy ballad “Meeting Across the River” doesn’t do that, and it changes the pace of the album just before the closer “Jungleland.”  Whether it’s the “wall of sound” style of producer Phil Spector, soulful R&B horn breaks, obvious nodes to Bob Dylan, or something else, most of these songs look backwards to old styles, with commonplaces that might be called pastiche — though frequently leaning more heavily on guitar riffs that the sources of inspiration. This looking backward is significant, because it tends to underscore the lack of new demands in the music.  If stereotypical 1960s radicalism was about pressing established institutions with demands intended to undermine those very institutions, then Born to Run kind of relents and says that no new demands will be made.

If contrasted with Springsteen’s excellent debut album, the turn with The Wild, The Innocent & The E Street Shuffle and then Born to Run can be seen as selling out.  According to the standard narrative (pushed in promotional materials for reissues of the album), faced with a commercial crises for lack of album sales, he capitulated to the forces that his debut leaned against.  The transformative idealism of the debut was gone, which suggested asking new questions and creating new attitudes to fit those questions, and it its place a kind of empty idealism that was all about action stripped of context, kind of like running on a treadmill — there is the illusion of movement (breaking free) that really keeps the runner in one place.  This was somewhat similar to what French “new philosophers” of the 1970s (Michel Foucault, Bernard-Henri Lévy, André Glucksmann, etc.) did, when they asserted that the only revolutionary project is that of self-realization.  And yet, this album is quite an effective sellout effort!  This is the sort of album that can be appreciated much like Leni Riefenstahl‘s Nazi propaganda film Triumph des Willens [Triumph of the Will].  If this sort of comparison seems like a stretch (see also “Godwin’s Law”), then consider that alienation and isolation were preconditions for totalitarianism according to Hannah Arendt.

So maybe it is time to rethink Springsteen’s “blue collar” bona fides.  There are few, if any, albums from the 1970s that so succinctly capture and redirect the populist underpinnings of neoliberalism as dynamically and persuasively as Born to Run.