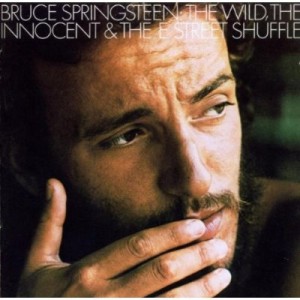 The Boss took a very significant turn with his second album.  His debut Greetings from Asbury Park, N.J. was quite obviously influenced by folky singer-songwriters.  It also had a youthful exuberance with a sentimental and even romantic attachment to gritty urban concerns.  All that managed to be a strength because of the overall sense of earnestness it had.  For some reason, that debut wasn’t a big hit (perhaps a very minor one), and continues to be less popular with fans than what came later.

Springsteen’s second album The Wild, the Innocent & the E Street Shuffle makes a conscious effort to cast off any remnants of folk influence.  In place, there is a reliance on heavy production.  This album tries very hard to sound contemporary, and simply “big.”  Overproduced?  Yes!  Springsteen’s vocal adopt some dramatic flairs (like “Kitty’s Back” with his reaching vocals, set against a hushed vocal chorus, and similarly with the sappy orchestration of “New York City Serenade”).  The keyboards and guitar sound more synthetic, with self-consciously jazzy inflections.  And isn’t “Rosalita (Come Out Tonight)” just basically a re-write of “Blinded by the Light” from the last album?

So, it’s no wonder that fans who like the Born to Run Springsteen don’t go for the debut, but will probably like this one more.  This album is chock full of typically disingenuous Springsteen fare.  Springsteen’s attempts to find the glory of middle America have always seemed like something of a joke to this reviewer.  For one thing, once Springsteen was a star his attempts to pass as just another “working Joe” seem fraudulent.  He was a big star, not the little guy anymore.  But it’s the hypocrisy of Springsteen’s writing that really is the most irksome.  His tendency to use irony often stumbles when he simultaneously relies on the very things he mocks to do draw in listeners.  You know, F. Scott Fitzgerald is often described as writing about the dark heart of the jazz age.  Springsteen clearly tries to do somewhat the same type of thing for working-class America of a later time.  But, but, but, the problem is that Springsteen becomes more of an enabler for the worst qualities that cause the very problems he laments.  It’s this sort of passivity, fatalism and sense of powerlessness in the face of powerful, incomprehensible forces that is really quite pathetic, and it makes its appearance on this album and only grows stronger on later efforts.  Fitzgerald never gave his characters the kind of pass that Springsteen does so regularly.  For Fitzgerald, his characters have failings, and they most often fail to accept the inevitable consequences of a wealthy lifestyle until it’s too late.  For Springsteen, escapism is fine, and he’s gonna glorify the here and now, but he’s never going to set his sights on more.  This is found in his songs that pretty consistently stop short of offering any kind of explanation or resolution.  It gives the impression of somebody a little naïve about how the world really works, giving comfort to the likewise ignorant.  Srsly, fuck you Bruce.  This may give short shrift to many great singles and individual songs The Boss has released, that do capture the bleakness of life for ordinary Americans, but the entirety of many of his albums reveal more than a little lack of ambition.