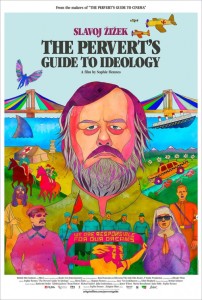 Making a film about philosophy is not an easy task.  The main problem being: how to keep the audience awake?  Iranian filmmaker Abbas Kiarostami has said that good films can put you to sleep.  But these sorts of films are not always widely appreciated, for very much that reason.

Enter Sophie Fiennes and Slavoj Žižek, with a documentary — the sequel to The Pervert’s Guide to Cinema (2006) — that makes contemporary philosophy as entertaining and engaging as possible.  Some may say it is still not engaging enough.  But the intellectually curious should find a lot to wrestle with, and at least will walk away with a list of interesting movies from around the world that they have probably not yet seen.  Ultimately, the film paints a beautiful and horrifying picture of how movies stage our dreams, where desire arises, and how ideologies correlate those desires to objective circumstances to create meaning.

Desire comes from the symbol of the “Big Other”: a god, or, in this case, cinema.  It provides meaning to otherwise meaningless, solitary existence.  In Fiennes’ and Žižek’s earlier collaboration, The Pervert’s Guide to Cinema, Žižek said, “Cinema is the ultimate pervert art. It doesn’t give you what you desire – it tells you how to desire.” It would have been helpful to repeat that assertion here, to better explain the new film’s title.  Still, the underlying concepts of importance are revisited here.  A key one involves Žižek’s attempts to philosophically preserve free will, as a small but crucial factor set against a backdrop of philosophical concepts that increasingly explain relationships traced back to determined, objective conditions.

The way these objective circumstances are subjectivized is through ideology.

“Ideology is our spontaneous relationship to our social world – how we perceive each meaning and so on and so on.”

But every ideology has to “work as an empty container, open to all possible meanings.”  He illustrates with deft examples from Cabaret (1972) to The Fall of Berlin (1950) how different efforts to portray fascist or communist propaganda can utilize the exact same ideological frameworks, the same “empty container”.  This analysis of ideology can be applied to anything. To look outside this film, take “business management” gurus. They recommend, for instance, setting a big hairy audacious goal, but it should be attainable. This might help explain why business attracts (and selects for) unhealthy people. They seek simple pleasures from defined goals within the existing organization and obtain excess enjoyment from the social prestige and career advancement that comes with achieving those defined goals.

“How come it is easier for us to imagine the end of all life on earth — an asteroid hitting the planet — than a modest change in our economic order?”

He suggests not waiting for such a magical event to produce change from without, but rather,

“We should draw a line of distinction, within the very field of our dreams, between those who are the right dreams — pointing towards a dimension effectively beyond our existing society and the wrong dreams, the dreams which are just an idealized, consumerist reflection, [a] mirror image of our society.  We are not simply submitted to our dreams – they just come from some unfathomable depths and we can’t do anything about it.  This is the basic lesson of psychoanalysis — and fiction cinema.  We are responsible for our dreams.  Our dreams stage our desires — and our desires are not objective facts.  We created them, we sustained them, we are responsible for them.”

He takes a complex view of desire.

“A desire is never simply the desire for certain thing. It’s always also a desire for desire itself. A desire to continue to desire. Perhaps the ultimate horror of a desire is to be fully filled-in, met, so that I desire no longer.”

There are different ways to control desire.  Žižek is quite explicit about the methods he favors.

“The conservative solution is we need more police.  We need courts, which pass severe judgments.  I think this solution is too simple.”

Taking a page straight from filmmaker John Waters (“I thank God I was raised Catholic, so sex will always be dirty.”), Žižek talks about how religion, using the example of catholicism, puts in place prohibitive injunctions with a hidden message to enjoy transgressing those limits.  This is too simple, though, because it takes away freedom, and responsibility.

“Freedom hurts.  The basic insight of psychoanalysis is to distinguish between enjoyment and simple pleasures.  They are not the same. Enjoyment is precisely enjoyment in disturbed pleasure — even enjoyment in pain.  And this excessive factor disturbs the apparently simple relationship between duty and pleasures.”

Rather than seek something superficial and take unhealthy enjoyment from an excess, Žižek suggests pursuing deeper desires that will likely not be fulfilled and accepting the superficial pleasure that arise along the way.  He cleverly illustrates this while eating a Kinder Egg chocolate candy, the chocolate covering a simple pleasure and the toy inside something further.

Once freedom of this degree is put on the table, Žižek is talking about revolutionary potentials.  These have been tried before, and have failed, but he sees them as still worth pursuing.  On failed revolutions, he diagnoses the problem:  “The dreams remained the old dreams; and they turned into the ultimate nightmare.”  All these examples, with movies, Kinder Egg candies, and so forth, provide easily grasped examples of where the breaking points are among the stuff of everyday life.

This is a well-made film.  Its subject is weighty, yet leavened with the constant references to film and pop culture.  Terry Eagleton, reviewing a pair of later Žižek’s books, wrote that “Academic philosophers can be obscure, whereas popularisers aim to be clear. With his urge to dismantle oppositions, Žižek has it both ways . . . .”  This is precisely the paradox that makes The Pervert’s Guide to Ideology such an interesting film.  We have discussions of philosophy that make substantive points worthy of both academic and unschooled audiences.  And along the way, viewers can enjoy the “simple pleasures” of seeing Žižek dressed up in a ridiculous Stalin costume, or sitting in a re-constructed set of the club from Kubrick‘s A Clockwork Orange (1971).  Viewers unfamiliar with anything Žižek has written or said before should still be able to grasp this film, with some mild effort.  It represents one of the most potent distillations of his philosophical worldview.