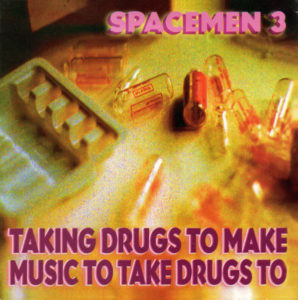 Originally released in 1990 on vinyl by Father Yod records, Taking Drugs to Make Music to Take Drugs to was re-released in 1994 on CD in an expanded form that included basically double the amount of original material, and then in 2000 another reissue tacked on a cover of The Red Crayola‘s “Transparent Radiation” (an alternate version of the band’s single).  The original 7 tracks released in 1990 were demos recorded at the home studio of Carlo Marocco in Piddington, outside Northampton, in January 1986.  They are often referred to as the “Northampton Demos.”  Those demos led to a record deal, and most of the demo songs were re-recorded for their debut album Sound of Confusion.  The tracks appended on reissues in 1994 and 2000 were recorded later, but the exact provenance of them is unclear.

These demos and outtakes end up being superior to the studio counterparts.  This belongs to be listed alongside the likes of the demos on disc one of The Jesus & Mary Chain‘s The Power of Negative Thinking: B-Sides & Rarities, and Bobby Womack‘s “Across 110th Street” demo, as being more classic than the formal studio recordings.  In this case, the title of the album is appropriate (a bit like the M-C-M formula).  This stuff is tripped out and psychedelic, but also crisper and more focused than much of the band’s studio output.  Frankly, this is the best that the band had to offer.  Listeners will definitely want one of the expanded reissues, because the additional tracks are very worthwhile.