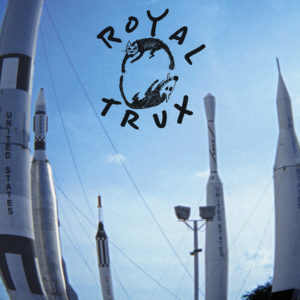 Royal Trux’s sound is notoriously, gloriously trashy, and on Cats and Dogs, for the first time, takes on classic rock influences, a few hints of psychedelia, and some overtures to the burgeoning grunge/alt rock of the day, but also retains a noisy quality held over from their early, uncompromising noise rock recordings.  In the next two decades, few would follow in their footsteps, though certain recordings by the Japanese band Boris come to mind.

The adoption of classic rock elements put Royal Trux in line with bands like Dinosaur Jr. and Spacemen 3, who, in the aftermath of the punk era, worked to return to pre-punk melodic guitar solo sensibilities (to a degree).  In a way, this re-established a kind of contercultural continuum after punk had stripped everything back to raw energy and simplicity, going back to the beginning.

Cats and Dogs is really one of the band’s best, in terms of being fairly consistent from beginning to end — and being listenable.  The songs are surprisingly varied.  There are “wall of sound” production techniques, bongos (!), and, yes, guitar solos from the reliably enigmatic Neil Michael Hagerty, who had a way of forging tenuous alliances between melodic hooks and dissonant abstractions.  He routinely attributed his approach to Ornette Coleman‘s music theory of “Harmolodics”, which in practice meant an emphasis on melodic intervals and rhythm over harmony and a fierce insistence on normative “equality” among performers and sounds.  People sometimes compare Black Flag guitarist Greg Ginn to former Ornette collaborator James “Blood” Ulmer, though in many ways Hagerty is more similar to Ulmer’s “Harmolodic” guitar style.  But you probably wouldn’t guess that the band had a female lead vocalist just by hearing Jennifer Herrema‘s raspy, growled vocals.  And just because this music is trashy, that doesn’t make it unrefined.  In fact, the hidden strength of Cats and Dogs is that it takes this kind of hazy, druggy, contrarian “townie” music very seriously — even though elitists would not — and these recordings are quite meticulously constructed.  Partly that is due to their expansive view of rhythm, and how it could be used the flexibly hold together a lot of disparate influences — at times the precedents from Captain Beefheart are striking (“Skywood Greenback Mantra”).

Noel Gardner wrote in a review, “As much as Royal Trux are a riddle wrapped in an enigma wrapped in an oily rag, they are a totemic example of greatness in the American rock underground.”  In a way, as much as I might agree with his ultimate conclusion, this is a look at the band from the top down.  From the bottom up, Royal Trux sort of reveled in lower class status, much like San Francisco’s Flipper and the Washington DC hardcore punk scene — of which Royal Trux were quite direct descendants.  To the extent that the band remained “a beacon of inspiration in a desolate cultural landscape” it was partly by carrying on, well after Cats and Dogs, when most of the micro-communities of like-minded musicians, fans and critics dissolved away.