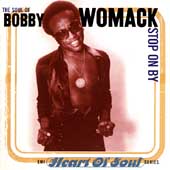 Bobby Womack had something no other soul musician of his time had. His songs were often complex and layered, with strings, horns, backing singers, and studio effects mixed in with guitars and bass. In spite of all that, his recordings sound intimate, as if Bobby was sitting across the room from you singing and playing. Unlike so many other performers, Bobby Womack never lost the basic simplicity of his messages in all the layers of sound piled on top. The ways he accomplished that aren’t readily apparent, though interestingly drums were usually simple and unobtrusive in his music. He took all the assets of a singer-songwriter into the realm of soul and R&B while still retaining the essential richness of the latter. Lots of this material sounds like a product of its time yet still holds interest. His “Across 110th Street” movie theme song has been reused in subsequent films (like American Gangster) to create a 1970s street life ambiance. This particular compilation is notable for being the first release of a demo version of “Across 110th Street”, which strangely enough might be Womack’s single finest recording. It’s just him on guitar and vocals. Without the density of the final studio version, his guitar sounds direct, and his vocals are actually more searching and powerful. Another of Bobby Womack’s qualities was his use of grown-up themes and lyrics. Like Isaac Hayes perhaps, and aside from their best-known movie theme songs, they both dealt mainly with small, nuanced subjects about relationships, lifestyle, getting by. I’m not sure Bobby Womack is the place to start if you’ve never listened to soul music before. But if you’ve spent time with the music of earlier soul legends, consider giving Womack a try. He was genuinely an heir to the great ones, and he took soul/R&B in a new direction. It probably takes a bit more effort to appreciate his stuff, but it’s definitely worth it.