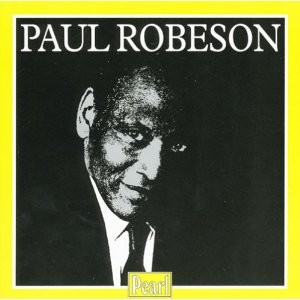 An excellent collection of early Robeson recordings for His Master’s Voice.  There are a large and confusing number of Robeson compilations available.  This one focuses exclusively on recordings from the 1920s and 1930s (and then mostly from the 30s).  The bulk of this consists of showtunes/pop, but there are some spirituals as well.  Though these recordings are so old as to have nowhere near the fidelity of Robeson’s 1940s recordings for Columbia Records, they, along with associated stage and screen appearances, are what helped first make him famous.  The songs included here are well selected.  It’s important to note that at this early stage Robeson was forced to record racist, condescending material in order to make a living in Jim Crow America.  So the version of “Ol’ Man River” from the musical “Show Boat” that is so closely associated with Robeson opens with the lyrics “Niggers all work on the Mississippi / Niggers all work while the white folks play.”  It is crucial that these bigoted lyrics not be excised from history and forgotten, as if it all never happened, but remembered for what burdens an artist like Robeson had to deal with.  Yet, this compilation does a huge service by sequencing “Ol’ Man River” (possibly the reason some might pick up this album) as the last song.  It’s worth noting that in later years when Robeson’s stature was assured, he changed the words of “Ol’ Man River” to be more dignified when he performed and recorded it.