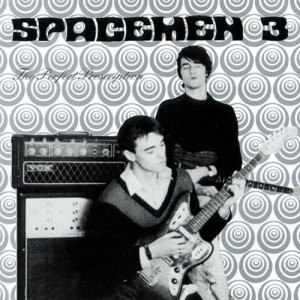 Spacemen 3 were hardly the most original rock group.  They wore their influences on their sleeves.  On their debut, Sound of Confusion, the effect was a jolt of pure slacker charm.  The Stooges, The 13th Floor Elevators, these groups were channeled with the gawkish, unashamed enthusiasm of a most wonderfully unadulterated kind.   Any why not?  It suited the music.  Here on The Perfect Prescription, the influences have shifted to The Velvet Underground, Lou Reed, even gospel music, processed through slightly jangly contemporary British psychedelia of the likes of The Teardrop Explodes, with a more lethargic, down-tempo groove.  This certainly set the stage for the next decade’s “Brit pop”, which you could consider an asset or a liability.  This one is a disappointment though.  Could these guys even play?  You have to wonder with the tuneless vocals on display.  The band seems to maybe start taking themselves seriously.  Snotty music that originated not far from the garage welcomed—no, deserved—to be resurrected with ridiculously faithful and inept 1980s recreations.  It was a proud declaration, “We have learned nothing in the intervening years!”  But the kinds of music with bigger aspirations that Spacemen 3 investigate on this album don’t quiet react well to similar treatment.  You can add acid to water, but not water to acid.  It’s the same with this music.  The irreverent treatment of the serious rock influences has the basic equation backwards, at least when lacking a sense of humor and recognition of the absurdity in doing it that way.  Ah, so it goes.  The Perfect Prescription does advocate for a new rhythm of drugged out rock, and for that it deserves some credit amidst its own shambolic, desultory downward spiral.