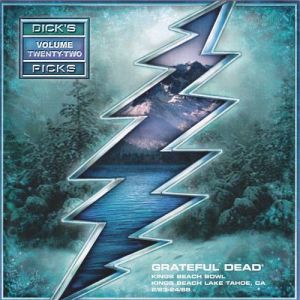 I’ve been listening to the Grateful Dead for quite a long time, and albums like Dick’s Picks, Vol. 22 are the reasons why I keep coming back.  The Dead from about 1967 to 1970 were a great musical force.  They were energetic, genuine and unique.  I almost hesitate to say unique, but I do mean it.  For one, the Dead had a postmodern style that drew heavily on blues, jazz, bluegrass, gospel, and even modern classical elements.  And it’s true that they never really contributed much to any of those genres individually.  But in their extended jams that drew all of them together, their revelry of juxtaposition was something unique.  This stuff was fun!  Rather than the dour, pretentious attitude so familiar to postmodern music, the Dead sounded completely different.  Perhaps the fact that the Dead don’t quite sound as “serious” as some people think they should is the very reason they are almost deemed off-limits.  Sure, it wasn’t that long before the Dead became content to churn out unremarkable AOR rock, with forays into faddish trends like their silly attempt at disco a decade on.  Yet here in 1968, playing in a bowling alley no less, the group sounds thrilled to be making music, without sounding like they are forcing themselves to sound like anything in particular.  Later on, that didn’t seem to be the case.  Contrary to their reputation, I don’t feel like they challenged themselves much from about 1970 onwards, instead becoming content to rest on a few of their own perceived strengths and ending up sounding just like a lot of other bands.  But those days lay far in the future back in February of 1968, back when maybe anything seemed possible.

I hate to say it, but the sound quality here is fair at best.  Still, the unusual mix (likely a necessity given the source tape) lends a few pleasant surprises in making Pigpen‘s organ and Phil Lesh‘s bass more readily audible.  In the end, substance wise, this is one of the finest live sets in the Dead’s extensive catalog, and I think the concerns about sound quality can’t really hold this album back much at all.