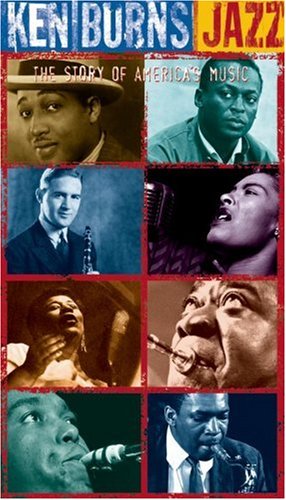 As an overview of jazz, this set definitely falls in the shadow of the great compilation The Smithsonian Collection of Classic Jazz.  There is a lot of overlap between the two, and to the extent that they are different, the Smithsonian collection is superior.  One principal reason is that the Smithsonian collection sticks to being an overview through about 1960, and doesn’t really go beyond that date (with a small number of exceptions mostly linked to the early 60s).  This Ken Burns set, however, does go beyond 1960, but offers only an extremely scattershot and poor representation of anything post-1956, and by the last disc seems veer into the territory of rock and pop songs rather than jazz.  Anyway, pick it up if you find a bargain copy more easily than the Smithsonian one.

This set does track somewhat the TV miniseries Jazz by Ken Burns, which in my opinion is an abomination.  Sure it has some great archival footage, but it’s buried under some hammy, overproduced narration and a deluge of longwinded Wynton Marsalis monologues.  The TV show is more a history of the rising and falling popularity of jazz in society, more than a musicological history of jazz the folk art and its evolution in predominately musical terms.  So, naturally, things stay pretty much on track through the rise of jazz to the height of its popularity, but completely fall apart during the period when the popularity of jazz was on the decline.  Rather than discuss the incredible space that was created at a time when tremendously creative artists more at the fringes were vigorously pursuing the idiom relatively free from commercial concerns when there were still enough jazz venues open, enough willing record labels, and recording technology had never been better, rather than touch on that era in a meaningful way, the TV series merely offers a few blunt dismissals of the “new” music of the 1960s (though you might say there is no such thing as bad publicity).  Then, as a final touch, the TV series displaces the discussion they should be having about the fragmented nature of modern jazz by filling up an unnecessary amount of time with lengthy obituaries to the jazz legends of decades past, many of which were previously presented in the miniseries at length, at the expense of the modern jazz legends of the era they purport to be discussing.  Given the length of the TV series, they can hardly say there was no room for modern jazz.  Also, you might guess it from the title of this particular box set, but they ignore 99% of jazz that came out of Europe or elsewhere.  In all, though, the TV series has all the faults of those history books that Howard Zinn, James Loewen et al. have pointed out: they revel in feel-good myths at the expense of hard facts, and manage to paint jazz as no more than a quaint historical oddity, only relevant today to the extent that it can be trotted out as a dusty museum piece or nostalgic/retro fad.  Contrary to what you’ll hear in the Burns TV series, jazz didn’t kinda die in the 1970s; the (hack?) critics selected for interviews in the TV series just happen to not like music of that era.  Bring in a different set of critics and you would have an entirely different set of perspectives.  The problem is that it relies on a kind of false consensus.  It would be like doing a documentary of 20th Century politics and featuring only talking heads from a single political party, one that was actively involved in politics of that era.  Would you trust it?