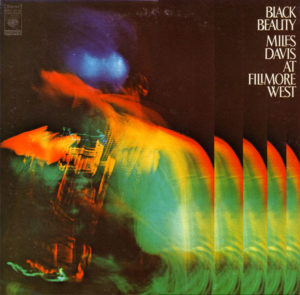 Good stuff.  Most if not all of this ranks among Miles’ best of the era.  Fans of Miles’ fusion period will find a lot to like here — though newcomers should perhaps proceed to Live-Evil and Agharta first.  This set sounds a lot harder and funkier than Bitches Brew, which came out around the time this set was recorded, though Black Beauty has a little more space than the denser material Miles would gravitate toward into the mid-Seventies.  Steve Grossman is the newbie in the band.  He wants to play as far out there as he can.  He is outclassed and in a bit over his head sometimes, but things still work out in the end.  Chick Corea is really the star here.  He’s a monster.  His nimble, distorted keyboards light up the set with some pretty intense workouts.  In many ways he fills out the group’s sound the way an electric guitarist like Pete Cosey would in later years.  At times his noisy, distorted keyboard makes this practically sound like experimental punk rock, crossed with European avant garde electronic composition.  Miles is relatively subdued by comparison.  He is almost off in the background much of the time, content to just nudge things one way or another from time to time.

To hear essentially the same lineup on a lot of the same material approximately one month earlier, with Wayne Shorter instead of Grossman on sax, try Live at the Fillmore East (March 7, 1970): It’s About That Time.  And to hear more from the next day and roughly two months later, try the crushing box set Miles at the Fillmore: The Bootleg Series Vol. 3 — which has some of the very best performances from a great period for Miles.  It seems like every minute Miles played on stage or in a studio in the early 1970s will eventually be released, and the world will be better off for it.  Black Beauty is a great one, and is particularly memorable thanks to Chick Corea.