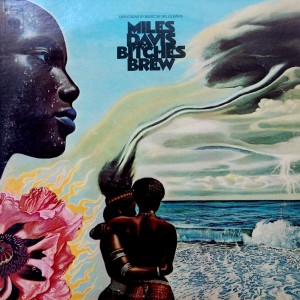 There is no question that Bitches Brew is a milestone of that beast known as “jazz fusion”.  What continues to astound is how odd it really was.  This was heralded for it efforts to introduce rock influences to jazz music.  But this sounds like no rock record of its age, or any other.  Miles went on to record far more “rock” sounding albums, like A Tribute to Jack Johnson.  This things was something else entirely.  It presents a modulating soundscape with hardly any points of reference.  No matter what angle you approach this from, its massive sound just overtakes your any contextual references brought to the table.  You can hear Miles play trumpet, but amidst the washes of keyboard, guitar, horns, bass and drums, the whinnies and blurts coming out of Miles’ horn sound other-worldly.  The sheer number of players that are heard and the amount of raw material spliced together to form the the finished product was something new for a “jazz” album.  What it ensures is that the textures continually shift.  I somewhat rarely throw this on my stereo, but when I do I’m always surprised.  There seems to always be another layer to the music waiting to be discovered.  The density of the vision is great, because you can pick out any song, jump in at just about any point, and find one of those perfect notes.  Those are the notes that feel like the culmination of the massive sonic fabric that surrounds them.  And to think that “fusion” was a fairly new concept when this album came together, it’s a remarkable thing indeed that the creativity and power of the album is at a maximum throughout.  Don’t bother looking for missteps.  For the most part, this album defined the 1970s in jazz.  That might have been for the better early on, even if it was for the worse after around 1975 when Miles went into temporary retirement.  There probably is no other artist or group that reached the heights Miles did with this form.  Sure, others made major contributions and achieved great things.  But Miles was able to take the basic idea here and take it many different directions over the years with countless lineups.  You’ll probably either hate this, or love it to the point of addiction to the relentless, harrowing journey Miles will take you on through the rest of his activities in the 70s.