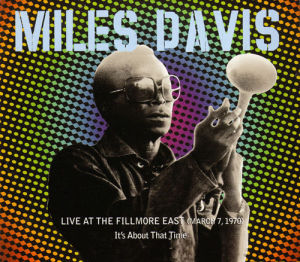 What Dark Magus is to the tail end of Miles’ fusion period, It’s About That Time is to the early part of it.  Both represent versions of his electric band at their most wild and unhinged.  While this album is a good one, it probably is only essential for addicts of this period of the Miles Davis discography.  It actually is closely related to Black Beauty: Miles Davis at Fillmore West, which was recorded about a month later at the other Fillmore, on the other coast.  The lineups on It’s About That Time and Black Beauty overlap substantially, but It’s About That Time represented the final performance of saxophonist Wayne Shorter with the group before leaving to form Weather Report.  Steve Grossman replaced Shorter, and that personnel change did have an effect on the group’s sound.  Grossman provided merely window dressing with Chick Corea taking command of most of the soloing, while on It’s About That Time Shorter and Corea, along with Miles, are jointly the workhorses of the group.  Because the Shorter lineup had only been documented on record once before this release (on the Japanese-only release 1969 Miles – Festiva de Juan Pins), It’s About That Time has taken on a certain amount of hype of the “holy grail” variety.  Don’t expect too many revelations though.  Shorter plays well, and he stretches about as far out as he ever did here, but he still sounds more or less like the same Wayne Shorter featured on Davis’ early fusion albums like Bitches Brew.  Critic Thom Jurek made the pointed observation that on Black Beauty Grossman “plays everything he knows in every solo.”  But because Grossman is only providing color, that’s not so bad.  The extra space allowed Corea, and the generally tighter sound from the band as a whole, to make Black Beauty the better of the two offerings, even if bassist Dave Holland is less audible in the mix.  Though, to repeat, if you are an addict of this period of Miles’ career–and if you like this period at all you probably are or will become an addict–then It’s About That Time is worth your attention at some point.