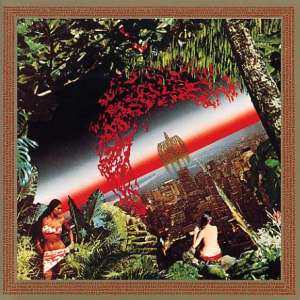 Miles Davis’ fusion period came to a head on Agharta.  His music was still melding rock and jazz.  It had become a more dense, ominous melange over the course of the last five years or so.  This is one of those albums that really encapsulates something essential about the tenor of the times.  It represents the tipping point, doing away with what has gone as far as it can, making way for something, anything.  The most indelible quality of this music is that it presents something that must be confronted.  It makes a certain imposition on its listeners–strange, foreboding vibrations with a tightly controlled and disciplined form.  That’s the key to this album.

The times were tumultuous, and Davis’ music reflected them.  Politically and socially a number of crass moves made this apparent to the observant.  President Nixon–the crook–had (illegally) taken the country off the gold standard, just to snatch away the legitimate progress other nations had been making.  The freedom (civil rights) movement had concluded a decade ago, and its gains were proving to be rather paltry.  Jim Crow racial segregation wasn’t explicit anymore but was still quite prevalent.  Cities were still de facto segregated, and jobs were not opening up, blacks were still poor.  The courts did step in to halt lynchings and similar racial terrorism of the most brazen sort.  Black militancy was waning, and as it did few lasting, tangible results beyond those of the ostensibly peaceful freedom movement remained.  In the broader view, these were the mere beginnings of a new order orchestrated from behind the proverbial closed doors, with jobs going elsewhere (offshoring), increasing financialization and de-industrialization across the whole economy.  The political right had yet to begin mass incarceration to obscure the removal of domestic job openings to locations abroad, though.  Women were gaining a greater say in Western society.  What did it all mean?  Well, in Davis’ music, you get a little taste of it all, without any firm conclusions.  Some major things were on the table.  Follow-through wasn’t always there though.  What else could he do after this but go into retirement?  Davis’ seclusion in his home in the coming years would be society writ large (Davis effectively retired from music for six years beginning just a few months after this live recording was made).  It would be up to the punks (still called merely “new wave” at the time) to carry the torch the rest of the way.  Not that Davis had a connection to that directly, but his stepping away from music after this was a call to action, and a lot of punks responded.  The idea that Miles was going to hold hands and drag along followers is the absurdity that his retirement rejects.  It is up to the rest of us jokers to get up with it and do something.  So in that context the absolutely funky rhythms of this music are appropriate.  Listen to this, well get up offa that thing.  By the way, this album’s title references a mythical (?) city said to reside at the Earth’s core.  It’s sort of a gnostic, Valentian conception of esoteric, utopian, secret wisdom.

At the time, it would have been easy to say, “what is this shit?”  Yes, it’s still easy to say that.  But, the more difficult proposition is to go back to this, dig deep, and maybe come to terms with some real progress found here.  Pete Cosey‘s guitar maybe isn’t just transposed Hendrix flash, but something that floats on looser moorings, free to access the full power of noise, even if it didn’t stay in that territory long.   Take a long, hard listen to this, and find a bunch of musicians able to play so much stuff independently at the same time, with a riveting sense of common purpose to attune their varied interests with space-age precision.  What makes this different from the more playful and sparring qualities of the various early 70s fusion albums the man made, is the sense of weariness, the last-ditch effort this represents.  What next?  Indeed.