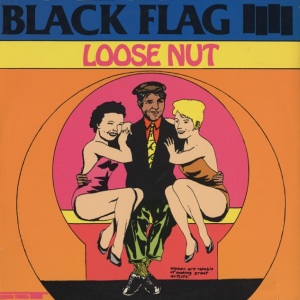 There is a real blue collar/working class attitude on Loose Nut.  Maybe that was always present in Black Flag’s music.  But this album taps into a really angry version of it.  Take “Annihilate This Week.”  It is about just getting through the week, beating back the drudgery and routine with alcohol and cigarettes.  It sums up the attitude of lots of people I used to work with at stupid minimum wage jobs, enjoying the time spent doing work that actually did accomplish something, however small and faceless, by taking up a low-rent kind of hedonism.  But maybe they take the low-rent hedonism as the focus more than getting something done along the way, not seeing anything beyond the week.

“Bastard in Love” is a great love song.  The title alone conveys that being “in love” is when social obligations are suspended.  But in this case, some “bastard” is just using this as an excuse for shitty, abusive behavior that masks narcissistic self-pity.  Meanwhile the song’s narrator is isolated, taking a more authentic view of love, but finds his view unwanted, and is stuck with pain.  The best part of the song is just repeating the epithet, “bastard…in lo__ove”.  It is the insistence of somebody pushing their stupid shitty relationship into other people’s faces.  Just a few lines of the song convey this perfectly.

There is nothing innovative about how this album sounds.  It basically adopts the sort of metal/hard rock sound that much of the working class (at least the men) in the USA listened to around 1985.  There also isn’t a whole lot of space separating Loose Nut from the sort of bluesy 1970s hard rock that was probably still on a lot of jukeboxes at the time, either, in bars that weren’t really about listening to music as much as drinking and meeting up with pals.  Yet it still hits pretty hard.  The guitar plays a more restrained role that in years past.  The riffs are often predictable progressions, but they cut loose in angular, eccentric solos, with dissonant resolutions all over “This Is Good,” and in a few other brief patches.  Loose Nut was the last time the mighty Flag summoned any real power in the recording studio.  The band’s demise was just around the corner.

Yet the most curious juxtaposition of Loose Nut is that it invites feminine perspective ever so slightly.  Kira complained about the role of the group’s sole female member, but the lyrics at least accept a position of non-dominance, even as those words are delivered with a solid roar against aggressive guitar and rhythms.  The macho perspective is consistently mocked across the album.  Maybe it isn’t transcended, but there are strides to counteract it.  Yes, maybe more could have been done.  There was still more happening in that regard on this Black Flag effort than in most hard rock of the late 1980s.