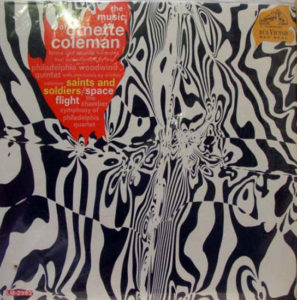 Ornette frequently stated that he considered himself a composer who performed.  Among his greatest achievements in recording compositions for a Euro-classical ensemble is certainly The Music of Ornette Coleman (AKA Forms and Sounds). This live recording is much superior to the 1972 release of Skies of America, perhaps the best-known of Coleman’s “classical” compositions and recordings.  It builds on “Sadness” and “Dedication to Poets and Writers” from his self-produced Town Hall, 1962 concert (and accompanying album).

The opening “Forms & Sounds” is an astounding piece — comparable in some regards to stuff like Stockhausen‘s “Zeitmaße” (1956) or “Kontra-Punkte” (1953).  It is performed entirely on wind instruments.  A density is achieved through having woodwinds players (The Philadelphia Woodwind Quintet) perform almost independently, which is to say that the notes played by each of the performers seem built from independent lines and notations rather than through overarching themes or motives.  Passages with the woodwind players are interspersed with (and separated by) Coleman playing trumpet solo.  Much of what he does would be classified as “extended technique” in the Euro-classical realm.  His performances are stunning — as much or more captivating than what the whole woodwind quintet achieves (and they perform excellently, by the way).  What really distinguishes this from European avant-garde music (Stockhausen, etc.) is the way the music shifts back and forth between the chamber ensemble and Ornette playing solo, with Ornette’s own playing being organized differently than the ensemble parts, with the occasional R&B/blues riff and offhand jazz phrasing.  There are differences between the two types of playing, but they are complementary.  This juxtaposition of differences without the two ever really meeting, and without one dissolving into the other, is the innovative contribution Ornette makes.  Of course, the parts that resemble prior avant-garde music are simply excellently conceived and executed.

The piece “Forms and Sounds” here was recorded live.  An earlier live version recorded in England appeared on An Evening With Ornette Coleman.  Ornette used the money he received to record a soundtrack to the film Chappaqua (a soundtrack ultimately not used in the film, but released on an album) to finance a European tour.  However, protectionist British Ministry of Labour quotas required that as a “jazz musician” certain British musicians must be engaged to play in the United States in order for Ornette’s band to be permitted to play in England.  That reciprocity didn’t happen.  These policies were notoriously discriminatory against pop and rock and roll music.  However, the country quota regulations had a loophole for “concert artists”, a category that included Euro-classical musicians and Asian improvising musicians.  So Ornette wrote “Forms and Sounds” in mid-August 1965, two weeks before the scheduled concert, and because of those efforts was successfully reclassified as a “concert artist” to enable the concert to proceed.  In spite of all this, the British union still retaliated by demanding different performers for the opening act and then later blacklisted the people who helped Ornette organize the concert.  The British musicians union pulled the same stunt when he returned years later, forcing him to compose “Emotion Modulation” (a backstage rehearsal of the “Aos” section of that piece appears on Yoko Ono/Plastic Ono Band).  In spite of its unusual origins, “Forms and Sounds” is still a notable composition, and the version here is superior to the earlier recording, which lacked the trumpet interludes performed by Ornette himself.

“Saints and Soldiers” is Ornette’s reflection on how the remains of both revered saints and lowly soldiers end up in jars after their deaths.  Strings (The Chamber Symphony of Philadelphia Quartet) are used instead of wind instruments — Ornette does not perform on the track.  It is yet another instance of Ornette’s politics influencing the way he writes music, with a dogged interest in radical egalitarianism showing through.  From a technical perspective, it is less innovative than “Forms & Sounds.”  In a way, this piece might be one of the first to highlight a question that would take on increasing relevance in Coleman’s music, especially in the 1970s and 80s with his fusion band Prime Time.  That question might be framed as one of federalism.  Fredric Jameson wrote about Thomas More‘s book Utopia (1516):

“More’s solution — to make all the subdivisions of his utopia equal in all respects — is a mechanical one, which casts some doubt on the equally mechanical uniformity of its citizens.  Federalism is the central political problem of any utopia…”  Fredric Jameson, An American Utopia: Dual Power and the Universal Army (2016), p. 79.

This echoes a criticism that can be leveled at Ornette and his “Harmolodics” system of musical performance.  He organizes the music very mechanically sometimes.  Here on “Saints and Soldiers,” he locks some of the woodwind players into rather rigid roles to hold them all equal.  The piece, on the whole, is still moody and effective.

“Space Flight” is the closer, and the shortest piece on the album.  It is played very staccato, again all on strings.  It has a punchiness or fire not found on “Saints and Soldiers.”  While hinting at afro-futurism, this might be seen more generally as part of Ornette’s ongoing fascination with space exploration — he later composed for NASA — and technocracy — in a later interview he described techno futurist R. Buckminster Fuller as his number one hero.  The song makes a fitting closer to the album, looking forward to the “space age” with hope and determination.

Today Ornette’s recorded work from the later 1960s is less known than what came before or after, partly due to fewer reissues, but The Music of Ornette Coleman is a crucial recording in his catalog.  It presents a unique and important facet of his career.  Even if less widely available than many other Coleman recordings, this one is worth seeking out.