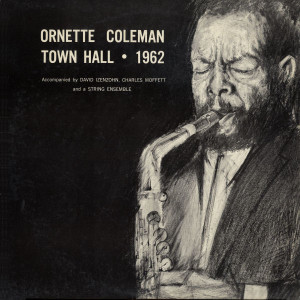 Town Hall, 1962 finds Ornette at the top of his game.  It was recorded only a few years out from his big breakthrough in 1959, but already his sound had expanded into new territories — very new territories.  The trio with David Izenzon on bass and Charles Moffett on drums was simply astounding.  Ornette was and is the kind of performer who simply has to do his own thing.  Aside from an accommodating nature as a composer, he has never been the kind of performer who can play according to any external constraints, meaning he never could never really be a sideman and even when he has tried that he has just tended to take over (such as with The Fabulous Paul Bley Quintet or even Tales of Captain Black).  That makes Izenzon almost his polar opposite.  Izenson was a very gracious performer who was flexible (and willing) enough to play what the situation created by Ornette’s sax called for, at any instant.  The dichotomy between Ornette and Izenzon is really key in pulling off Ornette’s new ideas effectively, particularly where those ideas called for more liberal use of space, slower tempos and a more lamenting feel.  Moffett was a great drummer, and his bop-ish licks were really a good match to Ornette’s style.  That is a big plus because I can’t help but feel that when Denardo Coleman permanently took over in the drummer seat years later Ornette’s groups never quite came together the way they used to, with Moffett, Ed Blackwell, Billy Higgins.  “Dedication to Poets and Writers” is performed by a string quartet rather than the trio, and makes the likes of The Music of Ornette Coleman – Forms & Sounds and Skies of America seem integral to Ornette’s long-term musical vision rather than mere anomalies.

This album makes a good companion to the two Golden Circle Vols. 1 & 2 discs on Blue Note Records with the same Izenzon/Moffett trio.  Ornette feels a bit more focused and intense here, as nimble as he ever was in his playing, pushing himself all the time, and that probably makes this the best offering of the bunch.  Though it is worth mentioning that Town Hall has none of the sunniness in the Golden Circle albums, which might make it less appealing to some listeners.