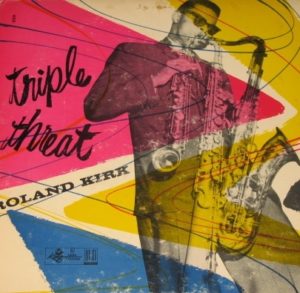 Roland Kirk’s debut album Triple Threat is fairly solid, even if much of the best stuff seems like only rough drafts for what he would refine later.  He plays with a charismatic forcefulness, leavened by some occasional (and comparatively tame) experiments and eccentric humor.  Bits of this adhere too close to forgettable hard bop genre conventions of the day.  Still, this is stronger than his next two albums as a leader, Introducing Roland Kirk and Kirk’s Work.  Fans of his later (and better) recordings will find things to like, as will general admirers of progressive hard bop.  Not an essential album, but a fairly decent one from a period when jazz was somewhat stagnating before a period of big upheaval.