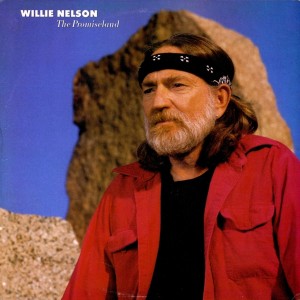 The Promiseland is mostly easy listening pop with a country touch, and side two is easy listening western swing.  Nothing is bad, exactly, it just sort of passes by without making any sort of impression, good or bad.  The late 1980s were in some ways the nadir of Willie Nelson’s recording career.  His vocals were lazy and the instrumental accompaniment was formulaic.  The Promiseland exemplifies those tedious qualities of this part of Willie’s career, as he was caught up in fame and not particularly focused on his music — soon enough troubles with the taxman would compound the distractions he faced. Compare this album to The Sound in Your Mind, from a decade prior, which features some of Willie’s very best vocals.  Earlier he sung in a way that used the songs to express something deeper.  On The Promiseland, he is just singing what is written down, technically hitting all the notes but delivering them all in the same way (often using the same consistently off-key approach to singing), like he hasn’t stopped to consider at all what each song is meant to convey.  He sings like he’s on a factory assembly line.  Charlie Chaplin made the monotony of assembly line work the epitome of hilarity in Modern Times, capturing the degrading, back-breaking toll it takes, but Willie seems to be using such an approach here merely because it is the path of least resistance.  It adds nothing to the music, and actually probably prevents the music from ever being really compelling.