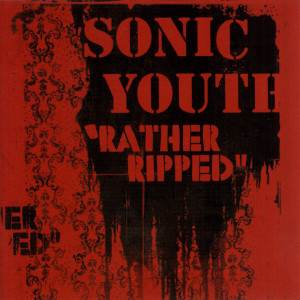 A rather average album.  It’s only slightly better than Experimental Jet Set, Trash and No Star, which isn’t saying much.  The Youth seem disinterested here.  It all sounds like a concerted effort to sound “straight”, or at least “marketable”, by reigning in the songs to shorter lengths and having more well-defined beginning/middle/end song structures.  But it all is too forced and self-referential.  The first two tracks are nice though.

The intriguing but often unsatisfying thing about Sonic Youth was that they evolved over their long existence, at a pace that is frustrating in hindsight.  So many of their albums kept one foot in whatever style they had recently found success with while tentatively stepping into all sorts of other areas.  This had the effect of feeling like they clung to what they had done before out of force of habit — or maybe for commercial reasons? — while taking their sweet time to sort out their next move.  Their peaks, of which they had many, tended to appear on record when they locked into a particular style and stuck with it.  So, their debut, then EVOL–Sister–Daydream Nation, then *maybe* Dirty, and then Murray Street, all of those locked into something more specific.  Some of the transitional material is good, but also doggedly varied in a way that prompts a listener looking back to say, “Ah, but they did that part better on the next album.”  Yet, on the other hand, Sonic Youth were always trying new things, and so there always were new parts to consider.  At least, there were new parts until Rather Ripped, which along with The Eternal had them stagnating if not looking backward for the first time in their career.

Did I mention that I miss Jim O’Rourke already?  If not, I am now.  This was the band’s first album without him after his brief tenure in the band, and his creativity and good humor seems conspicuously absent.