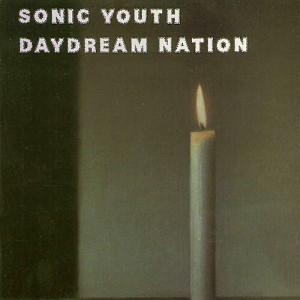 Exploding in all directions, Daydream Nation marks a dramatic apex in rock music.  Moving from the raunchy attack of Sister, the Sonic Youth developed a wall of guitar sound similar to Phil Spector. They tame noise. Daydream Nation builds on far-reaching experimentation while staying fairly accessible. Long albums usually wander but this effort stays focused. Few groups could produce a worthy follow-up to Sister, but Sonic Youth proved they were in this for the long haul by delivering something even broader in scope.

Drifting into “Teen Age Riot,” the album sets its goals high from the beginning. It may be the song of the decade. A blend of carefree innocence and well-intentioned desire, it marks the end of the 80s and ushered in the cynical 90s. “Silver Rocket” then steps up the pace to slashing melodies and power chords. Other highlights include “Eric’s Trip,” “Candle,” and “Total Trash.”

Individual songs do stand out, but really it’s the combined effect that characterizes the record. The attack of Thurston Moore and Lee Ranaldo on guitars blends seamlessly with Kim Gordon’s bass. Sporting some of the best guitarist in the game, Gordon blasts away on songs like “Hey Joni” adding her own kick to the already lethal mix. Without losing any power, the band mixes sonic textures on a level few bands ever reach. Steve Shelley’s drum work writhes in endless rhythms. He adds enough groove to keep any R&B band envious and stretches abstract beats into a firm base. Amidst the sound textures, Shelley is the elusive catalyst in this otherwise dreamy music.

Daydream Nation is so thoroughly integrated it is difficult to pick out individual songs from the flow. While still comprised of distinct songs, that device does not confine the group. Themes of troubling disillusionment and imagined contentment pervade. More prophetic than personal, the broad social focus doesn’t dwell on autobiographical narratives. The Sonic Youth use their experiences as raw material for a bigger purpose. Biographical portraits occasionally slide in to cement the album’s developing themes. Right to the closer, “Trilogy,” Daydream Nation brings out the band’s best songwriting while brilliant performances beat down any trace of predictability.

Naked motives exist somewhere beyond written lyrics. Vocals put the album in context. Shifts between singers expand the changing dynamics. Warbled cries and monotone rants document a tension between disillusionment and acquiescence. No other similar statement exists so beautifully executed — particularly from a production standpoint. Hundreds of years from now historians and anthropologists will analyze this record to understand one small part of the twentieth century.