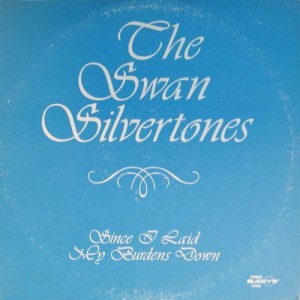 There a number of observations I can make about The Swan Silvertones’ material for the Savoy label from the late 1970s and early 1980s.  The group was in its autumn years, and this was most evident in the song arrangements.  Once a hallmark that placed the group above their peers, in the Savoy years the song arrangements tended to be more utilitarian.  The backing vocals use rather boilerplate harmonies that add almost no rhythmic embellishment.  This makes the backing vocals sound almost the same for every song, and the points of interest are almost never the backing vocals.  Louis Johnson was the only recognizable member from the group’s heyday, and he handled essentially all of the lead vocal duties.  That isn’t to say the songs are always dull.  They tend to be mellow, but are often heartfelt enough to be enjoyable.  The instrumental accompaniment is generally quite respectable, and often is the factor that makes certain songs stand out.  The instrumental performances may not innovate, but are skillful enough to match a typical 1970s soul outfit.  The last point I will make about the Swan Silvertones’ Savoy albums is that they tend to be quite short, typically including only eight rather compact songs — this particular album tops out at just over 25 minutes of music.  About half the material is also usually filler.

Regarding this album in particular, it probably falls somewhere between At the Cross and Day By Day in both style and quality.  Side one might be a little stronger than side two.  But the filler tends toward the tedious more often than not.  The new version of “Mary Don’t You Weep” here pales in comparison to the group’s classic version from the late 1950s, instead being vaguely comparable to the earlier re-make on Only Believe.  The bass line on “Trying to Reach Perfection” is lifted straight from “Chameleon” on Herbie Hancock‘s Head Hunters.  Still, the smooth and mellow “The Lord Will Make a Way” and “It’s Hell” are among the group’s best recordings of the late 70s, those and “Lord I Thank You” being probably the only reasons for fans to bother with the album.