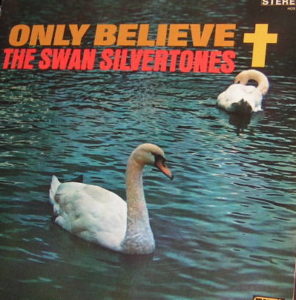 The original album jacket clearly identifies Only Believe as a studio album, but the feel is loose and in the spirit of a live performance complete with audience applause and shouts.  Lots of space is given over to what seem like improvised passages.  Rev. Claude Jeter‘s “replacement” Carl Davis is featured on a few songs, with Louis Johnson leading the group in a decidedly rock/soul direction throughout.  Paul Owens also gets a lot of room here, singing some great leads on “Tell God” and “Oh Lord, I Thank You”.  This is a pretty enjoyable outing, with the more open-ended arrangements proving to be an effective change of pace from the group’s intricate early 1960s sound.  The Swan Silvertones really perfected this style on Great Camp Meeting.

As a side note, the opener “I Only Believe” is presented in two parts with a break in between, though the album jacket doesn’t really note that fact (though CD reissues tend to present each part as a separate track).  Also, the song is listed as 5:29 in length but is in actuality a minute shorter.