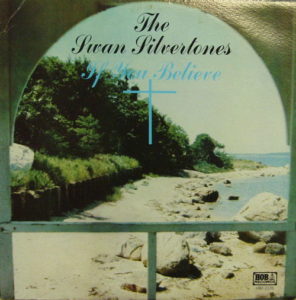 If You Believe (or If You Believe Your God Is Dead, Try Mine, as the sticker on the LP itself says) was sort of a transitional album for The Swan Silvertones.  They seem to have made some overt attempts to keep their sound up to date, without completely abandoning the style they settled into starting in the late 1960s.  Side two is stronger than side one.  It’s somewhat easy to tell why.  Longtime band member and manager John Myles was a good, strike that, great arranger.  He only arranged three songs on this album, though — the title track plus the first two songs on side two.  While this album isn’t his finest hour by any means, he’s still effective.  Most of side one was arranged by Louis Johnson, with some assistance from James Lewis.  Johnson was not very adept at using arrangements to match the material to individual singers’ strengths.  He also tended to put himself way out in front and minimize the backing vocals, at times to the point where the backing harmonies seem like an afterthought.  Because he dominates side one, it doesn’t really move like it could.  New (or new-ish) members James Chapman and James Lewis wrote the last two songs on the album and sing lead vocals on them.  It is a nice change of pace to hear their contributions, which, along with the greater presence of John Myles, make side two the more interesting and enjoyable half of the album.  The instrumental backing is purely functional throughout, not the subtle counterpoint it was previously or the saving grace it would be later on.  This isn’t a bad Swan Silvertones album, but it’s also far from their best.

As an aside, the titles of the last two songs seem to be erroneously reversed on the original album jacket (“Live Together” is heard last on the recording itself), continuing the sloppy packaging in which HOB Records seemed to excel.