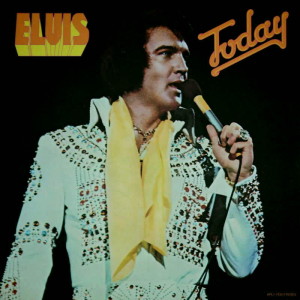 Today brought Elvis back into the recording studio for the first time in well over a year, since the sessions for Good Times (the follow-up Promised Land was compiled from outtakes of those sessions).  It finds Elvis in something of an identity crisis.  He dabbles in a little of this and a little of that, but never settles into any particular style.  There is a little bit of countrypolitan flavor in everything, but the individual songs range from boogie rock (“T-R-O-U-B-L-E”), to soul/R&B (“Shake a Hand”), to easy listening (“And I Love You So”), to straight contemporary country (“Fairytale”).  The problem is that little really clicks.  Elvis is stuck in the realm of the mediocre, which is territory he hadn’t really found himself in since the days of recording movie soundtracks almost a decade earlier.  Yet the mid-tempo country stomper “Susan When She Tried,” the ballad “Pieces of My Life” and the R&B torch song “Shake a Hand” are okay.  Biographer Peter Guralnick noted that these sessions weren’t as fun as ones a few years earlier, and that this was a time when Elvis’ entourage was shifting around and he seemed to not know who to trust as his personal relationships became exceptionally shallow.  Elvis perhaps could have stood to just pick a style and go with it, like a more extensive trip into boogie rock territory, doing a Little Feat cover (“Oh Atlanta” or “Two Trains,” for instance) or even just bringing Little Feat into the studio with him.  But really, it wouldn’t matter which direction he took.  Picking one would have given him a chance to focus and improve on a single sound.  Yet committing to anything on a deeper level was probably the biggest overall problem facing Elvis in 1975.  As it stands, Today is a middling effort with hardly any songs that stand out.