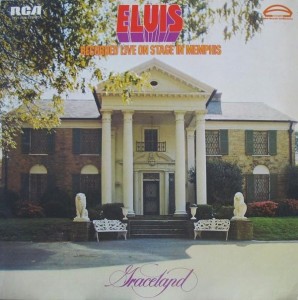 Anyone following Elvis’ career in the early 1970s will note the large number of live albums.  Oh, there were studio albums too, even really good ones.  But most of the studio albums came from just a few recording sessions, and some were bolstered with selected live material. This was the time of Elvis’ Vegas act.  It’s worth putting that in more perspective though.  The King hit it big in the 1950s, as the first rock and roll superstar.  But as his star rose, and he started to get into the movies, he was drafted into the Army and spent a few years stationed in Germany before returning to a musical career.  He recorded as soon as he got out of the Army, but attention soon shifted to the movies.  He didn’t perform concerts.  His albums were movie soundtracks, sometimes improbably including a good tune (“Viva Las Vegas”), but for the most part — Elvis openly admitted as much in his later years — they were terrible.  But with his Hollywood career going strong, he was resting his voice.  It did not suffer from years of hard touring.  He also made no attempt to be relevant in the era of Beatlemania and the British Invasion.  He suddenly came back with a late-60s TV special and his first new non-soundtrack album in what seemed like forever.  And then he started a Vegas act.  These career paths were unprecedented.  There simply weren’t any rock superstars before Elvis, so no one knew what they would do as they got older.  No rocker had ever made a “comeback” before.  But he could do it in part because he semi-consciously took time off from a focus on music, and the lack of touring meant his voice was ready and waiting for the task.  There also weren’t any rock and roll themed Vegas acts, which was given over largely to Rat Pack style crooners, Liberace-like spectacles, and non-musical acts, of course.  The signature feature of Elvis’ show was that it became huge, in terms of having an enormous cast of musicians supporting him.  He performed enormously complex arrangements of old hits and new songs.  And he and manager Col. Tom Parker always seemed to find great songs to incorporate into the act that fit Elvis like a glove.  The success of this style of show rested in large part on the tremendous amount of hard work that Elvis put into it.  But keeping the show going, often with two shows a night, took a toll.  Elvis notoriously had a growing drug dependency, one exacerbated by the pressures of the entertainment industry.  Despite hugely successful stands at the International Hotel in Vegas, big shows at Madison Square Garden in New York City, and the first ever globally televised concert Aloha From Hawaii Via Satellite, by 1973 he was collapsing and being hospitalized as a result of his failing health.

So then we arrive in 1974, when Recorded Live on Stage in Memphis was recorded March 20th at the Midsouth Coliseum.  In 2004 a reissue of this album presented the entire concert, but the original album featured only an abridged selection of material from the show.  The entire show followed more or less the same familiar formula as nearly all of Elvis’ concerts and live albums of the previous few years: commencing with “Also Sprach Zarathustra” (known as the theme to 2001: A Space Odyssey), then right into “See See Rider”, with a medley of 50s hits in the middle and familiar tunes like “Polk Salad Annie,” “An American Trilogy,” “Funny How Time Slips Away,” and “Suspicious Minds” littered throughout.  But what is most intriguing about this album is how it differs from the usual format of the previous few years.  There is a big band, but not with an emphasis on a huge string orchestra.  There are more intimate moments with Elvis singing just with a piano.  He also does some gospel songs.  Unlike most of Elvis’ live albums, the crowd is readily audible (though allegedly some audience noise is overdubbed).  It does sound at times like the band, and Elvis, have tired some of playing the same songs yet again, the same way as always.  But those concerns fade when listening to “Why Me Lord,” “How Great Thou Art” and “Help Me.”  What is unfortunate is that there does not seem to be the same level of effort in expanding and evolving the act as there was a few years earlier.  These are just minor adjustments meant to perpetuate the same successful formula.

This isn’t the best of Elvis’ live albums of his musical comeback.  It’s still a good one, with elements of widespread appeal.  It is best admired by fans who have heard his other material of the era and want something more that sets off in a similar direction with a few tweaks and slightly different material.  It’s too bad Elvis couldn’t just retreat back to the movies and then emerge in the late 70s/early 80s backed by a punk-like trio…oh, you know it might have worked!  Even Bob Dylan almost went with it in the early 80s.