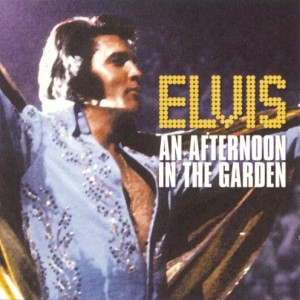 Recorded during the height of Elvis’ “Vegas” show era, An Afternoon in the Garden presents an afternoon show recorded June 10, 1972 at the 20,000-seat Madison Square Garden in New York City.  It was part of a sold-out four show stand.  The evening show of June 10th was previously released as Elvis as Recorded at Madison Square Garden.  There are plenty of live Elvis albums from this era (Elvis in Person at the International Hotel, Las Vegas, Nevada, On Stage: February 1970, Aloha From Hawaii Via Satellite, Recorded Live on Stage in Memphis, not to mention plenty of live cuts on That’s the Way It Is et al.), and most are quite good (uh, not Having Fun With Elvis on Stage though).  Guitarist James Burton really gets a chance to shine here, even getting space for a psychedelic wah-wah solo on the Presley favorite “Polk Salad Annie.”  The set list is almost the same as on Elvis as Recorded at Madison Square Garden, minus “The Impossible Dream” but with a few additional tunes here.  For that matter the set list is similar to many other Presley live albums.  But these are all great tunes.  What makes this set so amazing is that you get some of the soulful bombast of On Stage: February 1970, some of the grandiose theatrics of Aloha From Hawaii Via Satellite, plus some of the kicking rock drive of Elvis in Person at the International Hotel, Las Vegas, Nevada, all rolled into one perfectly balanced package.  Elvis just commands this show, with every little flubbed lyric chuckled off and re-purposed as an opportunity to charm the audience.  As with most other Elvis live albums of the era, this is a complete show that plays (almost) like being there in person.  Pop music rarely if ever had a figure like Elvis who could deliver with spectacular feeling and aplomb the biggest, brightest and best hopes and emotions of salt of the Earth folks who quite rightly dubbed him their king.  This is a damn fine album, recommended for anyone.