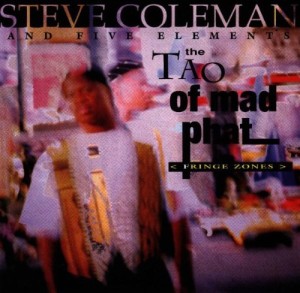 Steve Coleman.  There are perhaps few figures in 1990s jazz quite as pretentious.  He indisputably was a central figure of that time.  So many, from his now well-known early cohorts like Cassandra Wilson to later figures like Vijay Iyer, have taken influence from him.  He practiced a style of music he called “M-Base”, short for Macro-Basic Array of Structured Extemporizations.  Now, okay, I just called it a style.  Coleman has this to say on the matter: “Music critics have constantly stated that M-Base is a musical style and this is not true.  Since the beginning of time critics have by and large been unable to deal with any creative expression.  M-Base is a way of thinking about creating music, it is not the music itself.”  Mmmm, right, okay Coleman.  M-Base merely fits the accepted definition of “style”, but he say it’s not a style.  I guess this just puts him in the same category as teenage garage bands that sound just like The Stooges but refuse the connection and insist they are totally unique man!  You know, the kind of adolescent posturing that tries to talk a big game but does not deliver at nearly the same level, though, in fairness, is perhaps just due to being inarticulate and lacking self-awareness–dooming them to repeat musical history.  But that aside, Mr. Coleman should go read Science and Sanity by Count Alfred Korzybski, who famously said “the map is not the territory”, and then reflect on the fact that a table is not a table, it is merely something that is collectively understood by the word “table” and the word is not the thing itself.  Now that I’ve sufficiently blown your mind, writing more about Coleman and this album is probably a fucking waste of time, but, frankly, I don’t give a shit.  Come back and read the rest later.  I’m making a goddamn point here and it needs to be made.  Coleman has often used a trick much like many modern economists and their veneer of mathematics used to conceal their faulty assumptions and circular logic (or like Ornette Coleman with his “harmolodics” for that matter), which hides some rather simple ideas behind a bunch of technical jargon and big words.

Tao of Mad Phat has to be among Coleman’s best efforts from the 90s.  It was recorded “live” in studio before a small, select audience (not unlike Beach Boys’ Party!).  The hallmarks of the man’s sound are all here: lots of electric instruments and synthetic sounds.  The focus is on shifting rhythmic textures, with things like melody a mere by-product of the rhythms.  But then there is “Incantation”, which features a number of guest spots rather than his usual backing band, and which feels different in many respects from the typical M-Base style.

The basic sound though is kind of cyclic.  It’s like James Brown and Maceo Parker, sort of.  Though the focus on rhythm gives the music a narrow objective that lacks the daring of Miles Davis‘ funky fusion of the 1970s that took the limitless possibilities of Karlheinz Stockhausen‘s electronic music and applied them to jazz.  Steve Coleman usually took the sonic textures of fourth-tier 1980s funk and incorporated them into a jazz setting.  The tendency was to produce listless schlock like Black Science.  But Tao of Mad Phat isn’t listless at all.  The atmosphere provided by the staged “live” setting gives the band a chance to stretch and adjust their rhythms in a fluid manner, without the claustrophobic search for perfect meter, pitch and other distractions to spoil things.  For a change, performance takes precedence over theory.

There is the other issue of the “spirituality” of Coleman’s music.  This album avoids much direct expression of it in the performances.  It’s noticeable mostly in the titles of the songs.  Part of this element comes from a very vaguely Pan-Africanist view of the African diaspora, with similarly vague allusions to Asian religions.  The Afrocentrist elements were hardly unique to Coleman, as this was the era of One for All and that whole aesthetic.  While there is something noble, perhaps, in Coleman’s intentions, most often the problem is that stacked next to, say, Pandit Pran Nath or lots of other purely religious music, Steve Coleman’s stuff just…sounds…so…cheesy.  He comes across as the guy with statutes of Buddha, the Virgin Mary, and Ganesh in front of his house, because, well, he values all religions, and he shows it with plaster lawn ornaments.  It seems slapped on top, without deep foundations in the music.  Here at least, that whole aspect of the music is pretty easily disregarded.

I can’t exactly say I’m a huge fan, but this is a pretty good album, and it’s worth it if you have an interest in the upside of some of the most stultifying forces of the halcyon days of 1990s jazz.