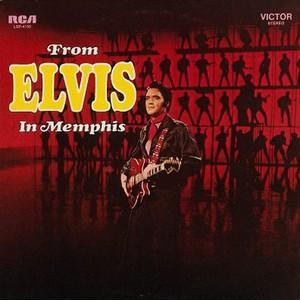 From Elvis in Memphis was recorded after Elvis made his comeback on a 1968 TV special.  It is widely regarded as one of his best albums — maybe the very best — from his later career or even his entire career.  That’s something.  On closer inspection this is a little different from that, but still amusing and intriguing.  This was the beginning of, or at least the immediate precursor to, the Vegas act, sequined jumpsuit period.   He was singing differently than he used to, with a smoother, rounder tone heavier on vibrato, taking away all the sharpness of his earliest recordings.  In a broader cultural context, this album came at the absolute pinnacle of the good times for the American working man.  Ordinary folks had their chance to obtain a small, bastardized piece of the leisure class lifestyle, and Elvis was there ready to grow fat and lazy with them. What From Elvis in Memphis offers is an attempt to portray a kind of “ordinary” life, street-wise and gritty, dressed up enough to keep the peons interested.  It’s a life of huge cars, electric home appliances, and a growing sense of deserved (yet limited) decadence.  The thing is, Elvis is always hesitant to go too far.  This is an album that doesn’t really want to get its hands dirty, or at least not too dirty.  So it can only look on its subjects from a distance, never quite getting there.  “In the Ghetto” is a perfect example.  It’s a good Elvis performance, but there are better versions that shed some light on the one here.  Candi Staton did a version (that Elvis liked) that goes that extra distance; it feels like it’s sung from the ghetto rather than looking in on it.  Then there is a version that Nick Cave and The Bad Seeds did.  The Bad Seeds’ version is reflective of Elvis’ performance, more so than of the song’s lyrical content, with Nick Cave singing it ironically on the basis of its kitsch value but always threatening to make it serious at any moment.  The songs on From Elvis in Memphis are mostly quite mediocre and the band forgettably professional.  But there is still something here in spite of that.  There is a charming pomposity in this music.  The vision it conjures up is the sort of humble guy growing up, making it big and looking back to those folks that got him there, as if kneeling down to deign some poor kid to admire his jeweled ring (hey, maybe you can make it too kid).  It’s like giving that kid, that kind of listener, this music out of a sense of charity.  It’s the subtle complacency behind that sort of a perspective that led to the downfall of the good times it enjoyed.  Rather than going the extra distance and being the sort of honest, humble music that might show a solidarity and adherence to the values of the common man, this album really takes the sort of view that sees itself as standing apart, looking back, acknowledging a divide from its origins and its audience.  Yet the lasting value of this work is that it represents the dreams and hopes of its times, even though those dreams and hopes are flawed and their achievement somewhat hollow.  There’s no denying that songs like “Long Black Limousine,” “Power of My Love,” “Gentle on My Mind,” “After Loving You,” and “In the Ghetto” are all solid expressions of these things — with much of the best material congregated on a very solid side two of the LP.  If this commentary means anything, consider it in the context of Orson Welles‘ film Vérités et mensonges [F for Fake], the notion that the act of forgery says something in and of itself about motives that lead humans to create art and artifice.