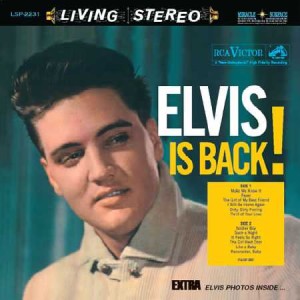 Elvis Is Back!, named in reference to the man’s return from service in the U.S. Army in Germany, marked a clear transition in his music.  The days of wild, energetic, iconoclastic rock and roll were behind.  The new approach is more clean-cut.  If the early Elvis could not be shown on television from the waist down, for what his gyrating hips implied, then the new Elvis was calculated to be a little safer and more palatable to parents, implying nothing much at all.  And to be clear, Elvis is Back! is calculated.  It’s a highly eclectic batch of songs, performed in a variety of styles, determined to find something to appeal to everyone.  There is peppy Drifters-style R&B/doo-wop, Hollywood country & western like Marty Robbins or Roy Rogers, sultry R&B/proto-soul like Little Willie John, secularized gospel, and a lot of teen idol heartthrob fodder.  There are no up-tempo rockers (though “Dirty, Dirty Feeling” comes closest).  Any echo of rural origins from Elvis’ earlier music is also gone.  The man’s voice lets go of its previous bite and sharp delivery in favor of increasing amounts of vibrato in the style of Roy Hamilton, something like a traditional pop or even operatic form of singing that doesn’t come from blues or rock.  Elvis, surprisingly, proves up to the task.  He sings strongly in this new way even without using falsetto or breathy vocals.  His stylistic range and versatility emerged here as some of his most unique and lasting talents.  While the songs aren’t all great–this was an era when the best stuff was reserved for non-album singles (like the ballad “Fame and Fortune“)–there are no missteps.  Elvis sings well, though really he would only improve in his vocal abilities in the coming years.  It’s easy to see how the styles developed here would later produce the best of what The King accomplished from 1968 to around 1972.  What shouldn’t be ignored on this record is the production.  Elvis’ handlers made this the absolute pinnacle of sound recording technology in its day, just as producers at Columbia had made strides recording Paul Robeson in the 1940s with new ribbon microphones.  New three-track technology allowed a crispness and balance between Elvis’ leads, backing vocals, and instrumental accompaniment.  This one is ultimately a bit of a period piece, evincing a time in pop music when innocence and conservative values briefly won out over the revolutionary energy of 50s rock–before being crushed by the wave of modernity in the “underground” rock movement of the late 1960s and the growing power of black soul music during the freedom/civil rights movement.  Yet, it’s probably one of the best examples of what strictly commercial pop had to offer in 1960.