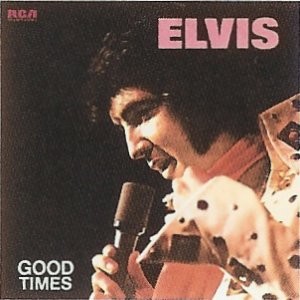 Anyone paying attention to Elvis’ career in the early 1970s, well, more accurately, since his 1968 TV special comeback, should have noticed some fierce music coming from The King.  His live shows were rightly a spectacle worth witnessing, and his albums were every bit as good.  But all that came to what in hindsight seems like a grinding halt somewhere in late 1972 or early 1973.  It was around that time that Elvis performed his historic live via satellite “Aloha from Hawaii” concert, which was good but seemed to still find Elvis starting to slip a little.  He wasn’t recording in the studio to speak of, and crummy offerings like Elvis (Fool) and Raised on Rock seem kind of like a slap in the face for fans.  Oh, and they hadn’t even been hit with 1974’s scathing tribute to Roe v. Wade Having Fun With Elvis on Stage yet!

So along comes Good Times, recorded at Stax Studios in Memphis, and on paper it looks like Elvis is actually trying again.  But then the music plays.  This album makes for an excellent case study in how every conceivable decision can be made wrongly during the recording process.  The songs, for the most part, are sappy and stupid, the strings and backing vocals treacly and overbearing, and Elvis seems adrift.  Case in point is Tony Joe White‘s “I’ve Got a Thing About You Baby,” a song actually suited to Elvis perfectly, but for which there was a superior outtake version that only appeared posthumously on a few collections.  The version here has Elvis almost hidden behind strangely echoed vocals, random string passages, dripping piano runs and depressingly satin guitar riffs.  Crap-ola like “My Boy” and “I Got a Feelin’ in My Body” seem like the sorts of songs that would be forced on Elvis if he was doing a weekly TV variety show and was running low on material, but an army of largely talentless orchestral arrangers were on hand to adapt cop show background music at the King’s behest.  Elvis had, suddenly, become a self-parody.  Or so it seems.  The same recording sessions produced material for Promised Land, which simply blows this out of the water by comparison, even if Promised Land is no classic.  And that really is the final knock on this album.  Faced with superior material, it was, for the most part, passed over to release this garbage first.  The middle-of-the-road “Talk About the Good Times” sounds alright mostly in comparison to the terrible stuff elsewhere on this platter.  But that’s a small consolation.  From here on out, Elvis’ problems would be many, both personal and professional.  His albums would only intermittently succeed on the strength of a few heartache ballads and down-and-out weepers, on those occasions when his band didn’t spoil the sadness and loneliness in his voice.  The good times were mostly over.