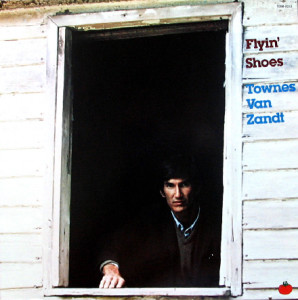 After a flurry of activity in the late 1960s and early 70s, Townes Van Zandt’s recording output slowed considerably.  For the next fifteen years, he released just two albums.  One was the concert recording Live at The Old Quarter, Houston, Texas, arguably his very best, and the other was the studio effort Flyin’ Shoes.  This contains a few great songs, “Loretta,” “No Place to Fall,” and, to a lesser extent, “Flyin’ Shoes.”  The rest of the material is noticeably weaker, and the production by Chips Moman, once associated with the Southern Soul movement but later associated with Elvis and pop-country crossover, is all wrong.  Moman overproduces Flyin’ Shoes.  Townes’ early albums suffered if anything from low-budgets and underproduction — a sort of indifference where it sounds like first takes were used when extra takes might have yielded improvements.  It is the opposite problem here.  There is polish, but that goes hand in hand with an overemphasis on presenting a more eclectic and varied sound across the album.  Most of those efforts don’t fit the songs or Townes’ vocals.  Where indifference on the earlier recordings oddly fit the folk-inflected, hippie country music Townes was making, slicker and tinnier production with effects like a vocal chorus and synthetic sounding electric bass just obscure the music.  The other reality, though, is that the counter-cultural movement that Van Zandt tapped into a decade earlier had faded and he struggles to find a footing outside that paradigm.  [Note: at least one CD reissue makes some rather unfortunate changes to the track sequencing, placing all the best material toward the end.]