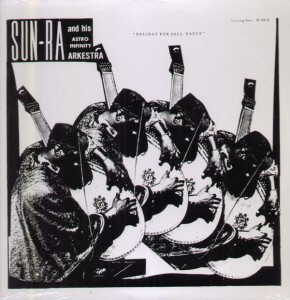 A set recorded in 1960 mostly consisting of standards plus one song (“Dorothy’s Dance”) written by Phil Cohran.  This is traditional jazz, something along the lines of Bad and Beautiful, Some Blues But Not the Kind Thats Blue and Standards.  “Early Autumn” has vocals by Ricky Murray that recall the mannered, almost swallowed vocals of Kenny Hagood on Miles Davis‘s “Darn That Dream” with the Birth of the Cool band.  Yet, these are not throwaways from the vault, but rather pleasant readings suitable for playing in company that would bolt for the door with most outer-space Ra stuff.  In fact, this might be the all-around best of Ra’s standards albums — though Some Blues But Not the Kind Thats Blue with its great John Gilmore solos is a very close runner-up.