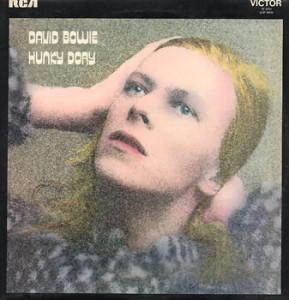 Hunky Dory is the album where Bowie started to really show some promise.  There are a lot of classic songs: “Changes,” “Oh! You Pretty Things,” “Life on Mars?,” “Queen Bitch.”  With “Eight Line Poem” (and even “The Bewlay Brothers”) he manages to channel The Velvet Underground‘s Loaded, but pushes the Velvets’ underground rock toward something a little more pop friendly.  However, Bowie keeps one foot firmly planted in routine British folk-rock for much of the middle part of the album and it becomes tiresome quickly.  Ziggy Stardust twisted the folk sensibilities a bit more, by adding rock opera to the mix.  In a more straightforward folk-rock setting he is underwhelming.  This is a very decent album, but don’t believe the claims it is Bowie’s best.