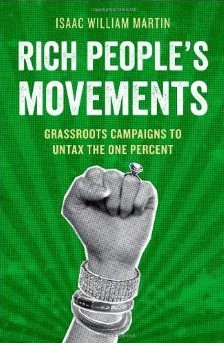 A sociological history of the co-option of progressive protest tactics (originally developed to advance the interests of the poor) in support of tax policies that favor the rich.  The title references the classic by Richard Cloward and Frances Fox Piven Poor People’s Movements: Why They Succeed, How They Fail (1977).  The premise sounds almost ridiculous, but Isaac Martin makes an interesting case.  His account seems fairly balanced, and for the most part seems reliably complete.  If there is a weak spot, it falls on the more recent efforts.  Martin doesn’t seem to provide enough context for why politicians suddenly capitulated to the same sorts of demands that had been made for decades, and he doesn’t necessarily treat all political parties equally.  It is a small quibble in an otherwise interesting and well-researched book.  This is a more thoroughly-researched and neutral academic treatment of a topic that has been addressed in other books like Thomas Frank‘s Pity the Billionaire (2012) and Paul Street and Anthony DiMaggio‘s Crashing the Tea Party (2011).