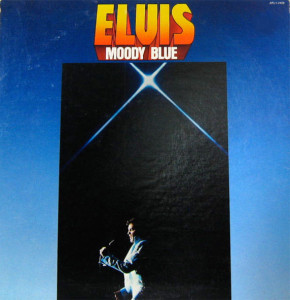 When searching for an allegory for Elvis’ later career, it’s tempting to think of Icarus, who flew too close to the sun with his wings of feathers and wax and then plummeted into the sea.  Although that Greek myth is often seen as a tale of hubris, there was no hubris whatsoever in Elvis’ iconic early 1970s live revue.  That was the Elvis who invented the big Vegas rock show, and who put on show after show to audiences of 2,000 or more, often twice a night.  Some claim that when he was performing a full 50% of visitors to Las Vegas went to an Elvis show on their trip!  It takes only a cursory perusal through Elvis’ early 1970s live albums to find that this was a man who could deliver huge songs with an amazing level of emotional commitment.  This wasn’t someone who thought himself the king of rock, this man was the king of rock.  So instead of Icarus, the better analogy is that of John Henry the legendary steel-driving man (a real person!) who outdid a railroad spike-driving machine, but at the cost of his life.  It’s the story of the human toll of modern existence.  The only way Elvis could do what he did as long as he did was with a steady supply of drugs.  He couldn’t stay ahead of the drugs forever though.  Inevitably, and invariably, those who surpass ordinary human limits fall.  So it’s more a question of sacrifice.  Elvis did too much.  But Elvis was an American icon precisely because rash excess seems like a national vice, and also because he did these things for us — the audience.

It is on Elvis’ descent, actually just before his death, that Moody Blue arrived.  It is a patchwork of live recordings from as far back as 1974 (the previously-released “Let Me Be There” from Recorded Live on Stage in Memphis) plus some “studio” recordings from the Jungle Room of his Graceland mansion (from some of the same sessions as From Elvis Presley Boulevard, Memphis, Tennessee).  This album is flawed, surely.  Seeing the inclusion of a track from a previous album reveals how little new material was available.  And “Little Darlin'” is every bit the moldy oldie it appears.  Elvis’ voice seems to lumber, moving in one direction and sticking with it.  But by and large there is a weepy country vibe here that suits Elvis’ dark and tragic approach to what are mostly sad heartache tunes.  This is a soundtrack to a lonely night crying into your beer.  It’s far from Elvis’ best.  Yet it might be the best he had to offer this late in his life.