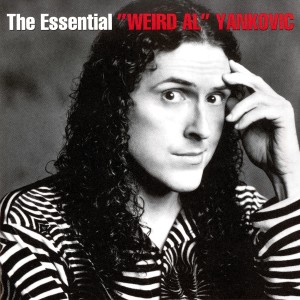 Weird Al has forged a career much longer than anyone would have guessed when he first started making parody songs in conjunction with the Dr. Demento radio show.  The essential character of his music has been to appeal to individuals, mostly young men, whose aspirations and expectations extend beyond their realistic chances for social advancement in life.  He appeals to people with more time and (pop) cultural interests than money, whose lives tend to be dominated by people and forces outside their control — his career tracks pretty closely a time when a gap expanded between worker productivity and real compensation and his popularity came when the gap proved to be a real long-term trend (plus his biggest commercial successes were after the 2007-08 financial crash around the time this collection was released).  His humor tends to play on an awareness of the base and trifling nature of consumer pop culture.  It kind of stops there though.  He winks with his audience in making fun of trashy mass media artifacts, all the while resigning himself to the dictates of that mass media and all its whims.  Al’s music kind of resigns itself to the pop culture ghetto, and in many respects breeds dependency on it.

He performed parody songs but also wrote original comedy songs.  Those who like Weird Al best always express a fondness for his originals.  Some of this songs are more medleys of popular songs, done in a novelty manner.  Take “Polka on 45”  (from his second album In 3D).  He does a medley of mostly pop/rock songs played as polkas with his accordion.  This sort of mashup of the “hip”, contemporary pop with passé and all-to-ethnic polka might be compared to some of Robert Mapplethorpe‘s photography, or other such “high” art, but no one does.  Al gets a laugh from the incongruity of throwing the different styles together that normally appeal to mutually exclusive audiences who listen to certain genres of music to separate themselves from the other genres, obliterating those attempts at social distinction.  “One More Minute” (from his third, and maybe best album Dare to Be Stupid) is a retro rock/doo-wop romantic put-down tune in the style of The Mothers of Invention (like “Go Cry on Somebody Else’s Shoulder” from Freak Out!), but pushed to absurdist extremes in its lyrical exaggerations.

Over time, Al kind of got formulaic.  That isn’t to say his music ever got bad.  But the early material was something a little new.  There were no guarantees that it would be popular, any more than a passing fad.  Al’s kind of self-aware musical irony was a way to normalize and humanize the vacuousness of pop culture.  Over time, that seemed less daring and more of a favor to the institutions of the music industry.  There are many stories of celebrity musicians being proud that Weird Al parodied one of their songs.  That sort of confirms Al’s insider status.  This was the same problem the pop/punk band DEVO faced.

Weird Al is kind of a great musician for kids to listen to, because his self-awareness provides good lessons for young people.  Yet adults should, in theory, kind of move on to deeper, more informed critiques of pop culture.  That isn’t to say this music can’t be enjoyed by grown-ups.  It can.  This collection, which was selected by Al himself, if nothing else proves how good Al’s band was, how astute his awareness of the nuances of pop culture was (including which songs were worth parodying), and how his broad humor managed to avoid quickly dated jokes based on easily-forgotten current events.  This particular collection isn’t exhaustive, and it omits multiple albums.  But it still makes a decent introduction to his career. 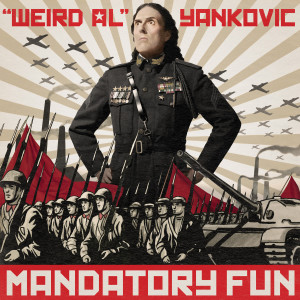 “Weird Al” Yankovic is kind of a cheerleader for capitalism.  The cover and liner notes of Mandatory Fun utilize communist kitsch imagery, but that is only to underscore that Al puts himself on the side of the capitalists.  In a way, the title “Mandatory Fun” implies authoritarianism — long associated with communist regimes during the cold war (when Al grew up) — though (perhaps unintentionally) it now connotes both the command to “enjoy” at the heart of modern times in the capitalist world and the competitive imperative to have a faculty with pop culture to seem aware and cultured.  Al himself even noted that the title refers to “an oxymoron that I’ve always been amused by. It’s used a lot in corporate retreats and, I’m told, in the military.”  References to business, corporate and marketing jargon reach a pinnacle in “Mission Statement” (recalling the frankly superior satire on the 1998 episode “Joshua” of the defunct TV show “Space Ghost Coast to Coast,” with a tune reminiscent of Crosby, Stills & Nash folk-rock).  But you might notice the absence of any parodies of socialist realist music on the album — Al doesn’t seem familiar with that music or the cultural forces behind it.

This music tries to use rapport building to win over its audience.  Take Al’s use of the accordion.  He plays the instrument precisely because it is considered passé in dominant culture.  So he plays it anyway, ironically.  This way the audience gets to be in on the joke, so-to-speak.  They are privileged to know that it is not the accepted instrumentation in an era of guitars (still) and electronics.  They can enjoy transgressing the silent injunction regarding the “proper” instrumentation for pop music.

Yankovic’s early work is fantastic, at its best.  It still holds up decades later.  And through the years he has continually proven to be an astute and dedicated observer of popular culture, translating those observations into ironically witty musical comedy songs.  Many of his songs are parodies, but some are originals.  Sometimes the originals are the best ones, like “Sports Song” here, which skewers the vapid, substanceless “us vs. them” hoopla around the big business of sports.  His vocals are set against the sorts of marching band “fight song” music today reserved for collegiate football (and sometimes basketball) games.  Al’s take on sports seems implicitly centered around (American) football, though the way he approaches the mainstream sports culture it hardly seems different from pro wrestling “sports entertainment” with aggressively flamboyant announcers and good guys vs. heels in the ring.

In an episode of the cable TV show “The Big Interview” featuring Yankovic, host Dan Rather commented that Al’s music (and associated comedy) is very good-natured.  This is an easy position to adopt because Al is not really opposed to the status quo.  He jests about the nature of present society, but he never challenges it.  The way he goes about that appeals to the least successful participants in the rat race.  It’s a bid for knowing moral superiority for people who probably aren’t succeeding on other — especially economic and political — terms.  He caters to an underclass that doesn’t want to admit it is an underclass.  With the decline of the power of working people in an age of austerity politics it kind of makes sense that Al’s career has only grown through the years.  Mandatory Fun was the best-selling album of his long career, earning critical praise and awards as well.

Frankly, this isn’t Al’s best.  Much of its commercial success comes from timing.  Yet it’s not a bad album either.  It has always helped that his longtime backing band is pretty great.  Plus when Al parodies songs that are pretty good to start with (like the “Tacky” parody of Pharrell‘s “Happy”) you get most of the benefits of the original song.  But Al has not expanded his palette much in decades.