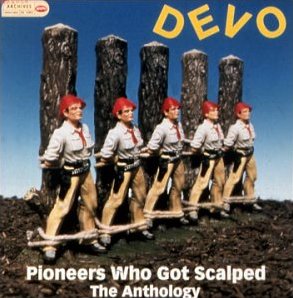 Well, Pioneers Who Got Scalped is a real mixed bag.  Disc one starts out great, but listening to disc two is a real chore.  In their early days, DEVO had sharp songwriting skills and a clever, absurdist sense of humor.  People call them a punk band, but I see them more as a disco band strongly influenced by punk rock–not that those genre distinctions really matter.  The band’s earliest recordings that open disc one satirize popular culture, often by way of clever new arrangements of well-known pop songs that frequently deploy mechanized, angular rhythms.  However, all that didn’t last.  By disc two, though it is apparent towards the end of disc one as well, the band just ran out of ideas.  Their recordings were still well-crafted but their songwriting became confined to unremarkably generic 1980s synth-pop, their sense of humor common.  I suppose it becomes difficult to skewer pop culture the more you become a part of mainstream pop culture.  And looking back it is hard to see DEVO as anything but a part of mainstream pop culture, from “Whip It” onward at least.