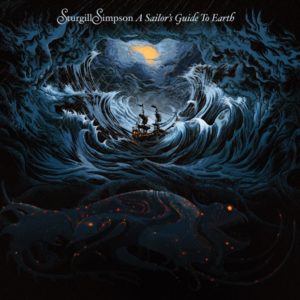 Following the success of his prior album, the excellent Metamodern Sounds in Country Music, Sturgill Simpson returns with a more grandiose effort, A Sailor’s Guide to Earth.  His voice still sounds like Waylon Jennings, but the approach of this album ranges from country to southern rock to southern soul to chamber pop.  The opening song has kind of spacey, vaguely psychedelic effects, but eventually launches into a full-throated soul song — very reminiscent of Willie Nelson‘s crossover success Shotgun Willie.  By the third song, “Keep It Between the Lines,” with a full horn section (The Dap-Kings) and prominent slide guitar, he’s squarely in the progressive southern rock territory of “Spanish Moon” by Little Feat (from Feats Don’t Fail Me Now).  Other songs recall later-period “roots rock” recordings by The Band.  The closer “Call to Arms” is pretty rockin’ and concludes the album nicely.  The lyrics remain a liability.  They are mostly pretty clunky throughout, despite best intentions.  And Simpson’s voice has a limited range.  But the musical ideas here are fun and return to the concept of crossover country music that brings together groups of listeners that won’t normally interact, even if it does so in a retro way (it would have been more radical and daring to combine country music with contemporary hip-hop or smooth R&B than the kind of soul music that was popular four or five decades ago).