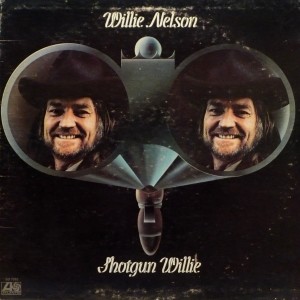 After relocating to the Austin, Texas area and taking up residence at the Armadillo World HQ bar, Willie Nelson dropped Shotgun Willie on the world, his first album for the new country division of New York’s Atlantic Records.  Nelson had been around for a long time in the music business, but this record was different.  At the Armadillo, he had brought together conservative (redneck) country audiences and liberal (hippie) audiences.  A more telling description though is that he tried to drag rock fans into the country fold without alienating his base of country music fans.  He tried and succeeded.  He also adopted a new look inspired by Leon Russell, with long hair, an earring and a short, slightly unkempt beard.  His first offering for Atlantic, as the label’s biggest country act, broke from anything he had done before.  For what it’s worth, he never tried to repeat it, either.  This was a record infused with rock sensibilities, bolstered by an occasional horn section.  It was his first recorded in New York City.  Actually, the first tracks recorded ended up populating his later-released gospel album The Troublemaker, with the Shotgun Willie material recorded toward the end of the studio sessions.  His regular touring “Family Band” is present, but augmented by Doug Sahm (Sir Douglas Quintet) and his band, Johnny Gimble, and both Waylon Jennings and his wife Jessi Colter.  His sister Bobbie joins the band for the first time on piano, and she proved an invaluable asset through the years.  Even troubled soul/R&B visionary Donny Hathaway gets an arranging credit.  Willie by this point had completely shed the crooning style of his earliest recordings.  Though it’s worth noting that Willie’s vocals would continue to evolve, as would his guitar playing.  “She’s Not For You” ends up being the most telling performance in terms of they way Nelson would refine his distinctive clipped, start/stop singing and guitar style.  There are some great tunes here, like “Whiskey River,” which Nelson would almost religiously use as a concert opener for, well, forever.  It’s the prominent drum beat (much heavier on the bass kick drum than usual), electric guitar (sans a lot of slide or twang), and horns (in true Atlantic R&B style) that allow this album to completely break from the mold of Nashville-styled country music.  It also has an upbeat tone that contrasts to the typical collection of sad sack country weepers that would have been more typical of the day.  No need for a tear in your beer to enjoy it.  This album garnered Nelson his first real taste of success, his best-selling to date. He was also getting recognized as a peer by the biggest acts in music, and not just those in country music.  His days of being considered a second (or third) class performer were now over.  Willie had some more good things in store, with a number of great albums delivered in the coming years.  But his road to superstardom took its biggest turn right here.  The take-home lesson is that the folks in New York knew how to record better music than those in Nashville.  Willie, and his new manager Neil Reshen, worked hard to get the opportunity to be the guy who crossed over first.