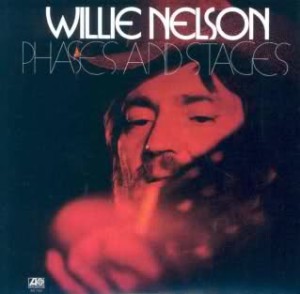 If a thing is really worth doing, it may take fits and starts and many failed attempts to finally get it done in spite of the tremendous inertia that resists changes of direction in life.  That describes both the process of making Phases and Stages and its thematic subject matter.  Willie Nelson worked on this album for a number of years before its release.  Many of the songs had been written long ago, and he had recorded early versions for RCA that weren’t released.  When he went to Atlantic Records, he had to obtain clearance from RCA before he could re-record the songs for this album.  While Willie liked to record with his touring band, the plain fact is that most of those musicians were of fairly modest abilities.  Producer Jerry Wexler brought Willie to Muscle Shoals Studio in Alabama, home of many great soul recordings, to create the album.  Rather than the touring band, Nelson is supported by crack session men.  It’s the finely-honed abilities of the supporting musicians that brings life to Willie’s music here.  He put them on the spot, perhaps forgetting he was the only one who had lived with these tunes for years.  But preventing anyone from settling into the familiar is a perfect match for the tone of the material.  Phases and Stage is about the dissolution of a marriage, with side one taking the woman’s perspective and side two the man’s.  This is Nelson’s second concept album, the first being Yesterday’s Wine.  Johnny Cash had pioneered the use of concept albums in country music.  With precedent behind him, Willie makes this one work.  What gives this album its strength is its ability to tap into the mundane aspects of a romantic breakup with poetic grace.  The proper songs are broken up by a 20-30 second recurring theme, “Phases and Stages.”  It’s hard to point to any faults on this one, save perhaps some people’s desire to skip the recurring theme.  Phases and Stages is one of Nelson’s most durable albums, among his very finest — maybe even his very finest.